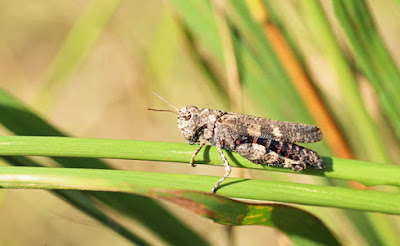 Autumn seems to be the season for grasshoppers. Tiny grasshopper nymphs hatch from eggs under the soil sometime in the spring or early summer and emerge from the ground looking almost like their adult counterparts. They of course are much tinier, and lack wings. They will eat and grow their way into mirror images of their parents by late summer and autumn. Agricultural areas, like where I live, seem to be host to a large variety of species and I am always coming across one I don't recognize, like the one pictured here. A very good friend of mine happens to be an entomologist and when I have "buggy" questions and need something ID'd I share images with him. He has tentatively ID'd this grasshopper as the Clouded Grasshopper (Encoptolophus sordidus). Another bug enthusiast thought perhaps it might be Encoptolophus costalis. So, once again I went to bugguide.net, the go-to for all things arthropod and submitted the image, and there is one response in favor of Eric's initial ID of Encoptolophus sordidus. We shall see if anyone else comments to dispute this finding and I will update this post as needed, but for now I am going to agree with the Clouded Grasshopper and thank Eric for helping me figure this one out.

I did a little research on them and discovered they have another common name of Dusky Grasshopper and they occur mainly in the Midwest and eastern United States and parts of Canada. They can be found in grasslands, prairies and meadows. The area where this one was found is on a small tall-grass prairie my brother-in-law has planted on one of our farms. 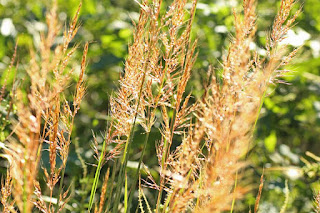 This farm is full of Big Blue Stem, Indian Grass and other native species of sedges, grasses, wildflowers and forbs, needless to say the grasshoppers love it there. The preferred food of the clouded grasshopper seems to be grasses, wheatgrass, and sedges, but they will resort to forbs if hungry enough. In times of drought and extreme food shortages they are not beyond turning to cannibalism to stay alive.


This species and Encoptolophus costalis (The Dusky Grasshopper) were once considered the same species, which I assume is why the Cloudy grasshopper is still sometimes referred to as the Dusky grasshopper, which can get confusing if we resort to using common names alone. After some research, taxonomists have discovered there are enough differences between the two, that it is warranted to separate them into individual species. One main distinction is their geographic range. E. costalis is primarily a great plains species whereas E. sordidus range is further east. Their breeding habits are completely different as well.

After looking at geographical maps of both species I am convinced more than ever that this species is E. sordidus, the Clouded Grasshopper. In John Capinera, Ralph Scott, and Thomas Walker's book "The Field Guide to Grasshoppers, Katydids & Crickets the range map for E. costalis does not include Missouri, so there you have it! 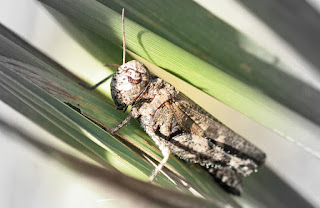