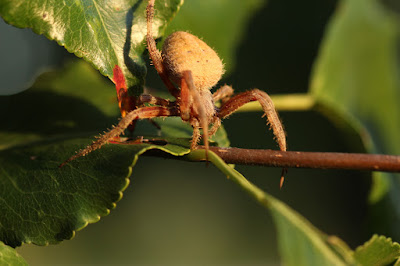 Orb Weavers, Orb Weavers, EVERYWHERE Orb Weavers! It seems every tree, bush, shrub, corn stalk and fence has some sort of orb weaver ensconced in a web busily hunting bugs and getting prepared to create the next generation.

Barn Spiders (Neoscona crucifera formerly N. Hentzii) are one of the most common orb weavers I find in my yard. I literally have dozens of these large females in various locations around the farm.

I found the web of the one pictured here before I actually found her! I walked right into the web and danced around like a maniac hoping the spider wasn't sitting on my shoulder. I'm not scared of spiders but the thought of a large spider hanging out on my person without an invitation, freaks me out! Luckily she was hiding among the leaves of the tree where the web was hanging from. I pulled down the branches to get a better look at her and decided to photograph her. She was a fairly tolerant photographic subject and posed quite nicely for me. 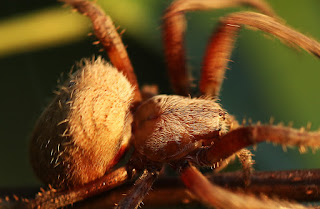 Neoscona crucifera have many common names, including Barn Spider, Hentz's Orbweaver, Dotted Orbweaver and just Orbweaver. The genus name of Neoscona loosely translates into "Spinning among the reeds" and was first described by Eugene Simon, a young French Arachnologist. The species name of crucifera probably refers to the faint cross or crucifix pattern that is visible on the abdomen of many specimens. This species is somewhat variable in coloration, but typically they are beige or rusty orange with banded spiny legs. Males are smaller than females with much longer legs.

Males seek females in the late summer to mate with. Once a female is encountered he will cautiously approach the web and tap out a series of unique moves that identify him as a mate and not a meal. With any luck the female will be in the mood for mating and not dining. If mating is successful she will form an egg sac and place it in a rolled up leaf to help conceal it from predators.

Each egg sac may contain up to a 1,000 eggs. That sounds like a lot of spiders being unleashed on the environment once they hatch in the spring. But the reality is they won't all survive. Many will be preyed upon by insects, birds and other critters that savor tiny spiders. Mud daubers are especially fond of orb weaver spiderlings. I would imagine the percentage of surviving spiders is very low, certainly no where near 100%. The spiderlings will remain clustered together for several days after leaving the shelter of the egg sac. Some may balloon themselves on wind currents to distant locations, others will remain near the area where their mother gave birth to them. 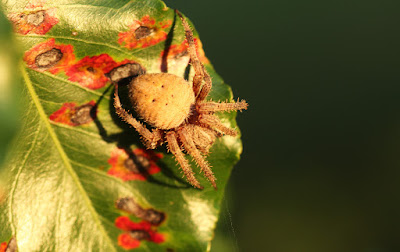 Even as tiny spiderlings they are capable of building elaborate webs that are mini versions of the ones they will create as adults. As adults the webs are much larger, up to 2 feet in diameter at the center with support lines attached to nearby vegetation, or buildings. They will often build near porch lights, one could assume these are the lazy (or smart) hunters. Lights attract bugs, and webs catch bugs---what a perfect set-up.
Webs are built at dusk and in the morning the female will consume the web. Eating the web provides extra protein for egg production in the form of tiny insects that are too small for her to wrap in silk and consume otherwise. She also recycles the silk to reuse later. Silk is a precious commodity that requires a lot of energy to produce, so it only makes sense to conserve what they can.

This species is one of the most wide spread of all the orb weavers. They are found throughout Eastern North America, and as far west as California, as well as Mexico. Like all spiders they have venom, but the venom is harmless to humans. It is designed to subdue and partially dissolve their prey. They rarely come in contact with humans so bites are extremely uncommon, and usually only occur if they are mishandled or if somehow caught in your clothing (when you accidentally walk into a web). If you are bitten it may sting, itch and look a little red for awhile, but is not known to be medically significant. The benefit of these spiders far outweighs any negative feelings we may have towards them. 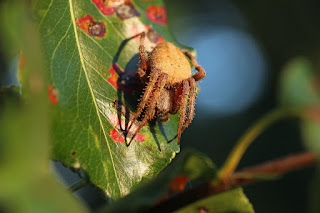