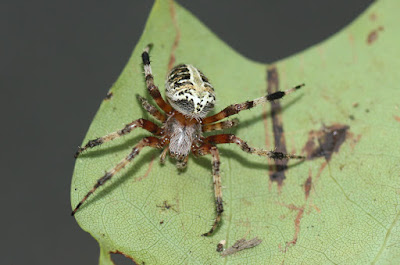 We've spent the past week vacationing in the Great Smoky Mountains near Townsend, TN. We rented a cabin in the woods and I expected to see plenty of wildlife. I must say I was somewhat disappointed in the amount of bug life and other wildlife we spotted near the cabin. However, I did spot this gorgeous spider in a web on the spindles of the deck. I'd never seen one quite like her and was anxious to photograph her....much more anxious than her I assure you. She was on the opposite side of the porch so I could not photograph her, instead I captured her and took her to a location to make snapping some photos much easier before placing her back in her web. 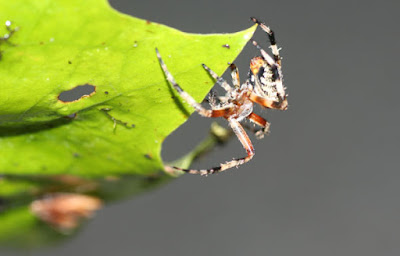 I posted her image to bugguide and had an answer within hours as to what she is. Spotted Orb Weaver's or Red-Femured Orb Weaver's (Neoscona domiciliorum) are found throughout the Southeastern United States from the New England States, to Florida and across to Texas. There are no known populations in Missouri where I live and typically post insects and spiders from. However that could just be because no one has reported seeing them. Tennessee is our neighbor so it would not be too much of a stretch to expect them to be here, especially in the bootheel. It is always fun for me to find species I've never seen before.

Like all orb weavers they build elaborate webs to capture insect prey. Each morning they will consume the web; silk is a precious commodity and takes a lot of energy to produce. Then at dusk each day they will build a new web which it takes a surprisingly short amount of time to do. I've seen orb weavers of other species build entire webs in less than 15 minutes. Late in the season they may leave their webs in place for longer periods of time and not concern themselves with dismantling it and rebuilding when other things are on her mind....like mating and producing an egg sac. Any energy conserves that she has will go towards forming an egg sac and laying eggs and not so much towards web building. 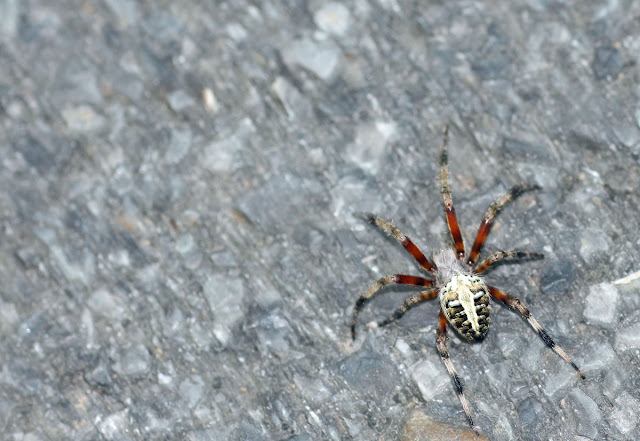 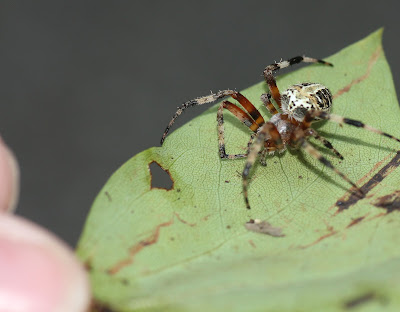 As you can see by the above picture they are quite speedy too when confronted with a predator....like ME. She scrambled away several times and I nearly couldn't catch her. I finally took pity on her and took her back to her web where she had a nice, juicy bug waiting for her to eat that she had captured sometime that morning or the evening before.

Spiders are measured by their body length without the legs factored in. This species is between 9/23 of inch to 5/8 of an inch. If we count her legspan she was about the size of a half dollar, so pretty large for an orb weaver. Their abdomen is grayish in color with two broad black strips down each side and a white band down the middle in somewhat of a cruciform shape. Legs are red at the first segment, then further down they are gray and black banded. The underside of the abdomen is dark with 4 white spots and a red tip near the spinnerets. Males are smaller and less bulbous in appearance than females.

Look for them in woodlands where hard wood trees are prevalent. They often build
their webs across man made walking trails, and if you've ever walked into a web you know how quickly you can invent some ingenious dance moves in the fear the spider is now crawling somewhere on your person. They will also build their webs on man made structures like cabins in the woods. In fact their species name of domiciliorum literally translates into "of dwellings" and probably refers to their habit of building on human dwellings. 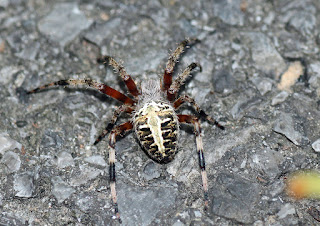