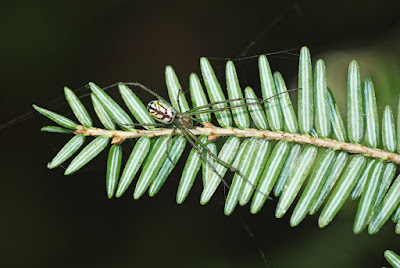 What these spiders lack in size they more than make up for in absolute beauty. The Orchard Orbweaver (Leucauge venusta) is without a doubt one of the most stunningly gorgeous orb weavers in Missouri. They belong to the spider family, Tetragnathidae , which are the Longjawed Orbweavers. This species has exceptionally long legs, especially the front two pairs, which makes them look an awfully lot like long-jawed orbweavers that they are closely related to, and which it is sometimes called. Like most species of spiders females are larger than males. Spiders are never measured in terms of legspan, but rather body length. Females may reach lengths up to 5/16ths of an inch, and males are smaller at 5/32nds of an inch. The background color of the abdomen is creamy or pearly with a series of yellow, black and orange lines running down the length. There is a sheen to the abdomen, almost a metallic look.

Look for them in low hanging shrubs, bushes and other plants especially in moist woodlands or wetlands. Like most orb weavers they build elaborate webs up to a foot in diameter for capturing insects. Spiders within the family Tetragnathidae build webs with a hole at the center where they will "Hang out" waiting for prey to fall  or fly into the web. You will usually find them hanging upside down and with their back facing the ground, so they will be placed on the underside of the web. This exposes their belly for viewing and sometimes causes them to be mistaken for black widows, which I find amazing. But, I guess if you see a reddish or orangish marking on the belly of a spider your first thought might be widow! 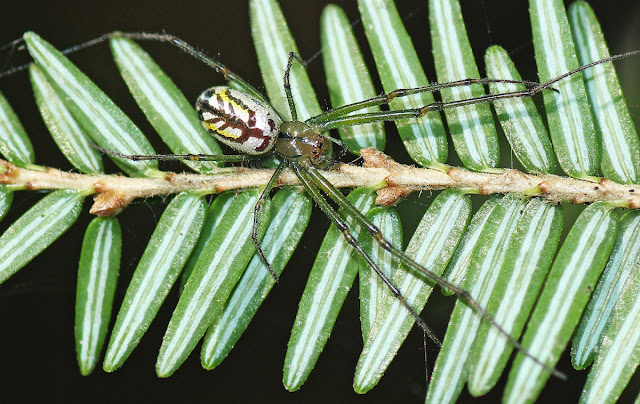 Mating takes place in late spring or early summer and the female will create an egg sac and deposit several hundred eggs within. She may place the egg sac at the edge of her web within the bush or shrub where she lives or she may attach it to a branch or twig. She will die by the end of the summer.  The egg sac will overwinter and the spiderlings will emerge from the sac in the spring and the cycle will begin all over again.


This is thought to be the only spider named by Charles Darwin, who we know to be the person behind the theory of evolution. The genus name of Leucauge in Greek translates to *with a bright gleam* and combined with the species name venusta which is Latin for elegant, beautiful or charming makes for a very apt name for these spiders. Although I'm not sure if spiders can be charming or not, but as evidenced here they can certainly be beautiful.

Like many spiders they will retreat when they feel threatened. Some will follow a drag line made of silk to a safe hiding spot somewhere near the edge of the web in some shrubbery, this species often drops completely to the ground to hide among the leaf litter. While this can make them somewhat difficult to find, taking a little time to search for them is well worth it to be awarded a closer look at the spectacular species.