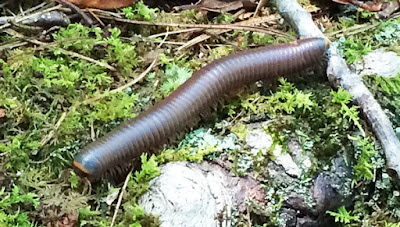 The North American Millipede, or as it is sometimes called American Giant Millipede, and Iron Worm(Narceus americanus) is found throughout the Eastern United States and can reach lengths up to 3 inches or more. They are much larger than any other species of millipede found in the United States.

Millipedes show up in our basement once in awhile that are about 1 inch in length and light tan in color. I recall one year after record amounts of rainfall we had literally hundreds of them creeping across the basement floor. Millipedes are attracted to moisture and it is common to find them in cellars, basements and along foundations of houses and other manmade structures. Narceus americanus however is a forest dweller and will be found in moist, deciduous woodlands among decaying logs and other organic matter on the forest floor.

The one pictured here was photographed in Tremont, TN on the Spruce Flats Falls trail at the Smoky Mountain Institute. My husband and I had hiked 1400 feet uphill for 1 1/4 miles to view the waterfall and on our way back down I spotted this millipede on the primitive trail after nearly stepping on it. I picked it up and placed it in the mosses and lichens along the side of the trail. 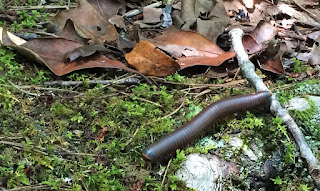 These millipedes are black or dark brown with visible reddish coloration between the segments. Millipedes also have two pairs of legs per body segment, rather than one pair per segment like centipedes. Millipedes feed on organic matter like fungi and other decaying plants, but may also feed on decaying animal matter as well. They are important decomposers in the environment where they live. There are some species of millipedes that are capable of producing a cyanide-like substance that can be harmful to humans and cause bad reactions. This species however does not produce any such substance. They do have a milder secretion they produce that may cause skin discoloration in sensitive individuals who handle them.


Despite the fact that they have so many legs, they are not known to be quick. But I must say this one moved much faster then I expected which made photographing it somewhat difficult. I kept having to catch it and place it back in position only to have it scurry off again before grabbing it, placing it back and lining up the shot again. After some patience and persistence I finally managed a few pictures and a couple of videos on my phone.

Millipedes are often long-lived creatures and may have a lifespan of more than 10 years. This species can live several years and will overwinter in leaf litter or old logs. They emerge in the spring to mate. Most millipedes will lay more than a hundred eggs after mating. From all the literature I read and after numerous internet searches it appears that this species only lays one egg. The female will eat some soil and defecate to form a nest of sorts and will lay a single egg within that nest that she will guard until it hatches. The newly hatched nymph will be a smaller, incomplete version of its mother with only 7 segments and 6 pairs of legs. It will gain a new segment each time it molts before reaching adult age. They reach reproductive age at about 2 years. 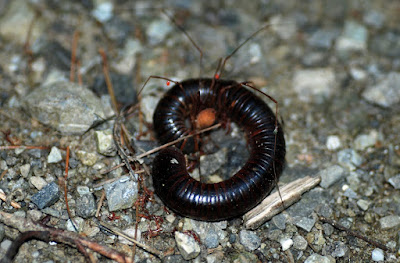 There are a few predators such as birds, frogs, some lizards and especially shrews that will feed on millipedes. Most animals however will not eat them because of the foul smelling defensive secretion they emit when threatened. This substance tastes bad and most animals will avoid it. The one pictured to the left had somehow died and this opportunistic daddy longlegs found it and made a meal of it. They may also coil themselves into a tight ball to protect their delicate belly from harm. 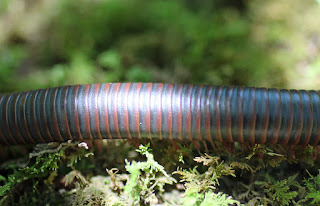 Look for them in woodlands all across the Eastern United States. These are unique, interesting and beneficial arthropods that are completely harmless to humans. They turn organic matter into nutrient rich materials that greatly benefit the soil and should be left alone and admired.