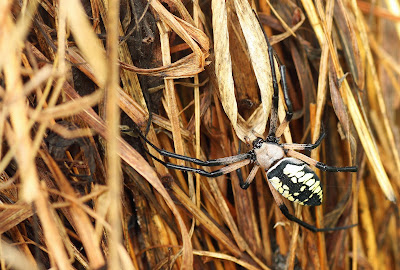 Black & Yellow Garden Spiders (Argiope aurantia) are found throughout the United States and are one of the most commonly seen spiders in Missouri. They build elaborate webs at the edges of field and meadows or crop ground which earned them another common name of Corn spider. You may also find them in their webs on the eaves of your home, or on your porch railings. Also look for them around outbuildings. 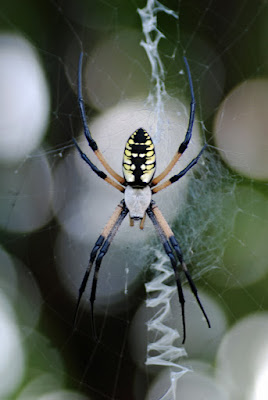 Their webs are unique structures measuring up to 2 feet in diameter with a stabilimentum running up the middle in a zig-zag pattern. There are differing opinions as to the purpose of the stabilimentum. Some researchers feel it may be a form of camouflage that aids in hiding the spider as it rests upside down in the center of the web. Others feel it acts as a lure of sorts to attract insects to the web and still others feel it may be a deterrent for birds to keep them from flying into the web and destroying it. I've even read that it may act as a stabilizer to strengthen the web and keep it from being completely destroyed by the large insects these spiders favor. Bugs like cicadas and grasshoppers struggle quite a bit when tangled in sticky webbing and can easily wipe out a well constructed web. Only spiders that are diurnal have stabilimenta at the center of their webs. So it must have something to do with other things that are also active during the day.

At the end of each day they will consume the center portion of the web, leaving the radial line that the "orb" is attached to. It may be that she consumes the web for the extra protein available from the tiny insects caught in the webbing. Or perhaps its just because webbing is a pricey commodity to create and conserving it only makes sense.

Males are much smaller than females and only measure up to .35" whereas females measure up to 1.10". Males will roam around seeking females to mate with, when he finds a likely candidate he will sit at the periphery of her web and use his front legs to "tap" out a dance of sorts that she will recognize as a possible mate and not food (if he's lucky). Once mating has taken place the male will die, having lived for the sole purpose of mating. She may consume him at this point for extra protein.

She will begin laying eggs on a thin sheet of silk, then cover them with another layer of silk. Then she wraps this all up in another layer of brownish colored silk that she will form into a sac with her legs. She is capable of laying up to 4 egg sacs containing up to 1,000 eggs within each sac. She usually places the sacs at the center of the web where she hangs out. This allows her to guard the egg sac until she dies, which usually happens when the first frost arrives. The egg sacs overwinter and hatch in the spring. The spiderlings will "balloon" to new locations and build their own webs. Many of them will be predated on by other spiders, insects, birds, frogs and other creatures fond of tiny spiders. So even though a single female may produce up to 4,000 eggs, only a small percentage of them will survive to adulthood. 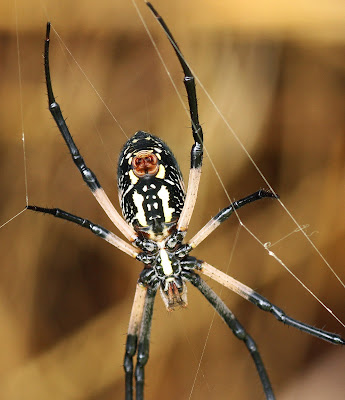 Humans have little to fear from these strikingly beautiful spiders. They are not known to be harmful to humans. Bites are only likely to occur when you grab one or mishandle one. A bite is reported to be no worse than a bee sting. If you have allergies to bee venom or other insect venom, then a bite from one could be medically significant and you should seek help.

Garden spiders are extremely beneficial to gardeners and farmers alike. They feed on harmful insects like crickets, moths and grasshoppers, controlling their populations and protecting your plants and crops from the voracious feeding habits of those insects. Not to mention watching them construct their web each morning is a fascinating thing to see. They should be welcomed to live in your garden and appreciated for the help they are providing, free of charge. 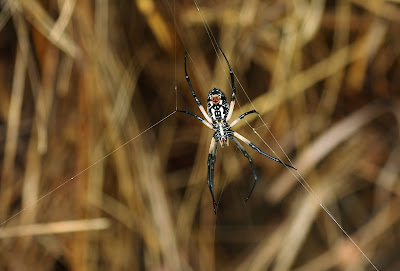 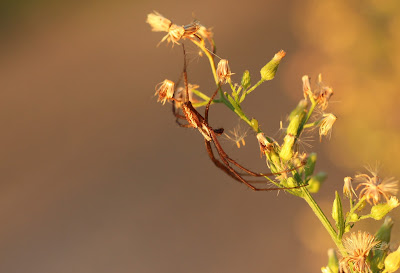