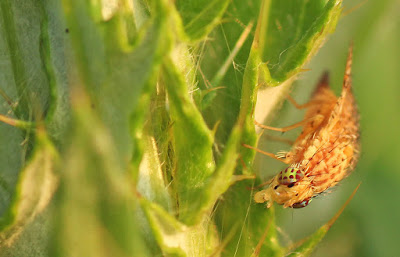 Peacock flies are a type of fruit fly in the family Tephritidae. There are approximately 500 genera, that include over 5,000 described species Worldwide within this family. The one pictured here is Paracantha cultaris and can be found throughout Western North America. This particular species lays its eggs within sunflower stems where the maggots hatch and feed within the head of the sunflower. Adults are typically found around sunflowers or other related plants.
Some species within this family nectar at flowers and on some level would be considered pollinators because of their feeding habits. By nectaring at flowers which contain high levels of pollen, like sunflowers, they will in turn spread that pollen from plant to plant essentially pollinating them just like bees. We don't always think of flies being pollinators, but many of them are quite good at it.

These flies run the gamut of being beneficial or harmful depending upon the species and their feeding habits. Some feed on crops and cause significant agricultural losses each year. Some are host specific and feed only on one plant species, like the olive fruit fly, which as its name would suggest feeds on olive trees. They cause vast amounts of damage to these trees in areas where they occur in large numbers.  Other species cause no damage at all and instead are beneficial to humans and are being used as a biological control measure against noxious plants like knapweed.

Because of their agricultural importance, fruit flies, might  be the most vastly studied of all insects found throughout the World. Whether they are being studied to learn control measures to keep them from destroying crops, or to learn more about their feeding habits and exploit them to benefit us in biological control measures; one thing is certain they are important enough ecologically to warrant time and money spent on learning more about them. 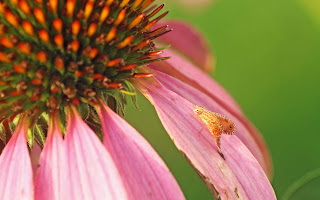 Flies within the family Tephritidae are small to medium in size and distinctive in coloration. Many are orange, golden, yellow, greenish and any number of other colors. They have beautiful picture-wings and eyes that look almost psychedelic in appearance. Others use Batesian mimicry to mimic bees and wasps, and others are experts at camouflage. Many of  these flies are strikingly handsome and always a fun insect to find among the flowers.

Some species live short lives and die within a weeks time. Other species live a full season or two. Be on the look-out for these flies among the blooming flowers as they feed, lay eggs and spread pollen from flower to flower. 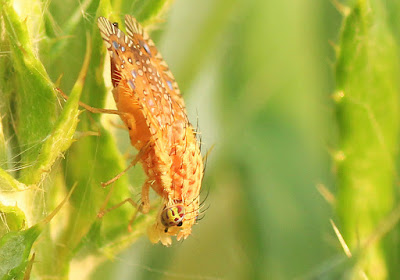