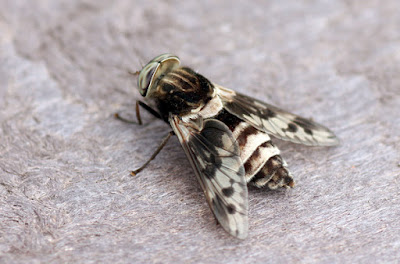 I found this beautiful horse fly at Squaw Creek NWR last week and had no idea which horse fly it was, I only knew that I'd never seen one like it. I photographed it and submitted the image to http://bugguide.net for identification. After several days I finally had a name for this fly, Tabanus venustus. Then the real challenge began, where to find information on it. I looked in every field guide I own, which includes well over 20 quality books on general insects, and one specific to flies and could not find this particular fly. So then I embarked on an internet search that lead no where. There were a few hits on the species name, but nothing useful beyond the fact that I now know this species of fly is found as far west as Oklahoma.

The eyes are a striking light blue with darker swirls, the thorax is dark brown with lighter brown streaks and furry in appearance. The abdomen was marked with white margins at each segment and the wings are spotted. It measured approximately 1/2 to 3/4 of an inch in length. Unlike most flies, who see a human approaching, it did not fly away. It sat perfectly still and seemed to be sunning itself on the piece of wood it was sitting on. I noticed several in the same general vicinity of the one I photographed all apparently soaking up the warm sunshine.

Females in this genus are known for biting to gain a blood meal. They have scissor like mouthparts that tear into flesh then they lap up the blood. Blood from warm-blooded animals provide essential nutrients for egg production. Eggs are generally laid near water and when the eggs hatch the larvae fall into the water to complete their lifecycle.

Flies in this genus are sometimes called "Gad Flies" and this might be in reference to their habit of roving to seek out potential victims of a future bite. This particular genus of flies contain numerous species that are capable of vectoring diseases such as anthrax. 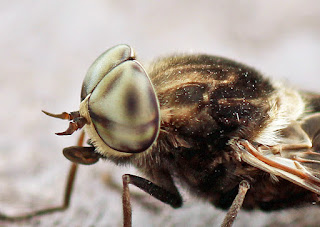 Bites from a horse fly can be quite painful to a human and may cause severe itching and swelling that may last hours or even months. My husband was bitten by a "black horse fly" many years ago and the bite was so irritating that it was painful and itchy for nearly 6 months. When seeking a blood meal these flies are relentless and will follow you many hundreds of yards determined to get what they want. I've known of them to chase people on ATV's, and there are reports of them coming after cars, I assume thinking they are giant mammals.

Horse flies are rarely anyone's favorite insect and the sight of them can send grown men running fearing a bite, but as larvae they feed on a wide variety of aquatic insects including mosquito wigglers. This food preference should be considered beneficial to humans, especially on a year like this year when we've had record amounts of rain fall and there is standing water everywhere, providing ample breeding spots for mosquitoes.

Sometimes we find beauty where we least expect, in this case it is was on the wings of a fly. 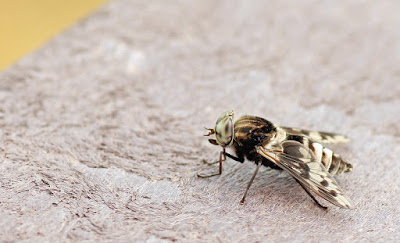