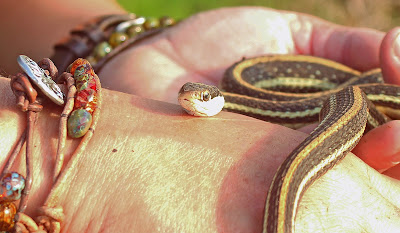 About a week ago my daughter and I visited one of the farms my husbands family owns to look for rattlesnakes. We spent about 2 hours wandering around, flipping rocks and enjoying the beautiful weather. We did not locate any timber rattlesnakes, but we did find plenty of other great herps, including this beautiful Western Ribbon Snake. I was busy flipping rocks when I heard my daughter Shaylyn yell that she had found a garter snake. I was pretty excited by this since we've not found many garter snakes on this particular farm, so I was curious to see what she had found. I must say I was even more excited by her discovery than when I first thought she'd found a garter snake. It turned out she had found a western ribbon snake (hamnophis proximus proximus) which are very closely related to garter snakes. This species was a lifer for both of us and we were happy to have the opportunity to photograph such a neat snake. I document all the species I find on this farm and I was happy to record this one as a first for this farm. 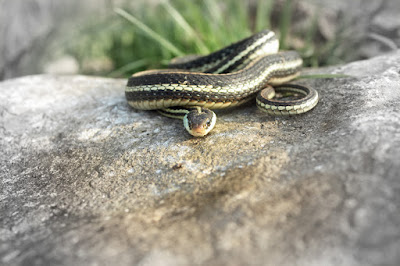 Ribbon snakes tend to be found near water, so it is somewhat puzzling as to why this snake was at this particular location. While we have had a lot of rain this spring, which partially filled a tiny pond that has been dry for the past 3 years, there really isn't much water to be found on this farm. The Nodaway River is about 1/4 mile away, which seems like a long jaunt for a small snake. While I might not understand why this snake chose our farm, it apparently thinks it is a good home.

Ribbon snakes are much more docile than their cousins the garter snakes and have been kept as pets with much success. They require nothing more than fresh water, proper food, heating and a 20 gallon fish tank. They may reach lengths up to 35 inches which makes them a manageable size as a pet. They are common, so there are no worries of pulling a rare or protected species out of the wild, which can result in fines. 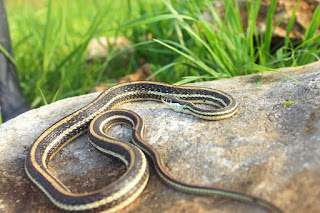 These are very slender snakes with a long tail that makes up 1/3 of its overall length. The body is dark with three stripes running the length of the body. The center stripe is often orange, but may be yellow. The belly is cream colored or may have a greenish cast to it. There may or may not be a yellow or orange dot on its head.
These are very fast moving snakes that are quick to flee when bothered. This one proved difficult to catch, but once we had it caught, it calmed down pretty quickly so we could get a few pictures before letting it go back under the rock where it was found. Like nearly all snakes, when bothered it musked, which is an effective defense that implements a combination of fecal matter and an oily musk that the snake releases from their cloaca (vent). Depending upon the snake, this can be mildly off-putting to outright nauseating. Garter snakes, or in this case the ribbon snake is more on the nauseating end of the that scale. This particular snake gave me a good dose of musk that nearly made my daughter gag and she claimed there was no way she was holding this snake. I had to laugh, because I've been musked so many times in my life that the smell doesn't bother me much anymore. I did have her drive home though, as I did not want the smell of musk to permeate my steering wheel as I drove. No amount of hand sanitizer can wash away that smell....trust me! 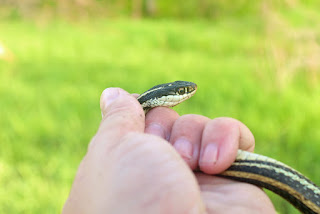 Ribbon snakes feed on a wide variety of prey, including earthworms when they are small, then later frogs, toads, salamanders, and small fish like minnows. These snakes are active beginning in April and will remain so until October. During the hottest part of summer they are mainly nocturnal. If the temperatures remain mild they will be active at all times of the day or night. Mating takes place soon after they come out of hibernation in April or May. Like all garter snakes, ribbon snakes bear live young sometime between June and September. Neonates (newborn snakes) are about 10 inches in length and the female may have up to 28 offspring in a single litter, but average is closer to 15.

One of the things I love about being outside and exploring our farms or any natural area is the new discoveries to be made. 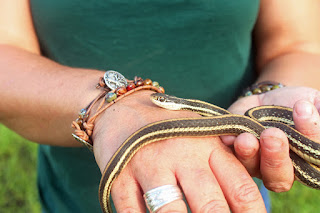