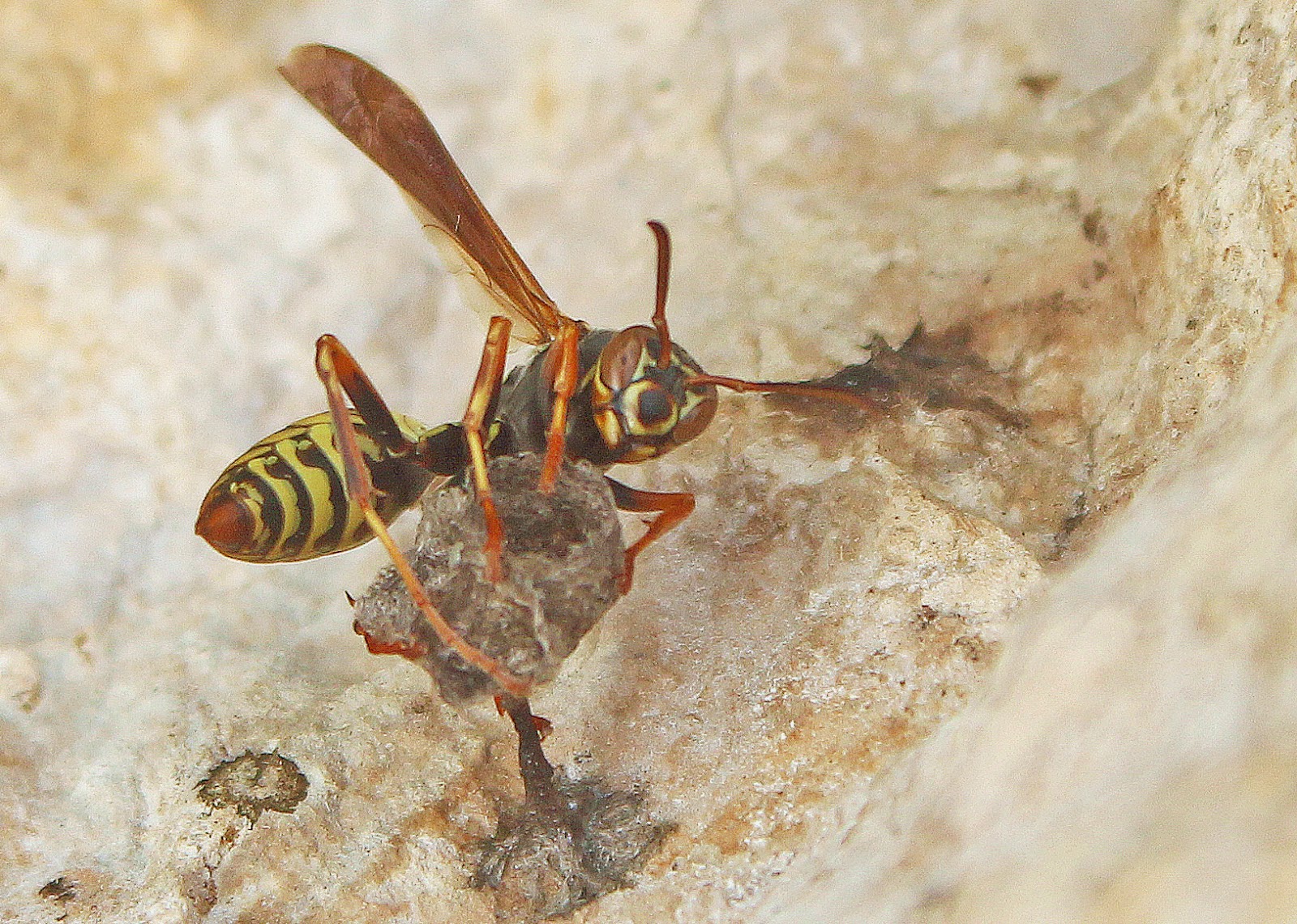 Young female paper wasps (Polistes fuscatus) are actively building their nests right now. They will seek almost any sheltered place to start their hive, including under large limestone rocks like the one pictured here. You will also find them in the eaves of homes and garages, inside old sheds and outbuildings, inside chicken coops, barns, etc. This single pregnant queen will form the nest and lay her eggs. When the eggs hatch they will be all infertile females, that will take over expanding the nest and feeding the offspring of the original queen. As the hive expands and becomes full of female minions they will often become very defensive and stings routinely occur if you venture too close to the nest. Give them space and you shouldn't have any problems at all. Wasps are able to sting over and over again which means an encounter with an angry hive can be a very bad experience. I've personally not had much trouble with them, but I know many people who have. Stings are painful and often cause swelling, itching and in rare cases anaphylactic reactions in those who happen to be allergic to bee or wasp venom. 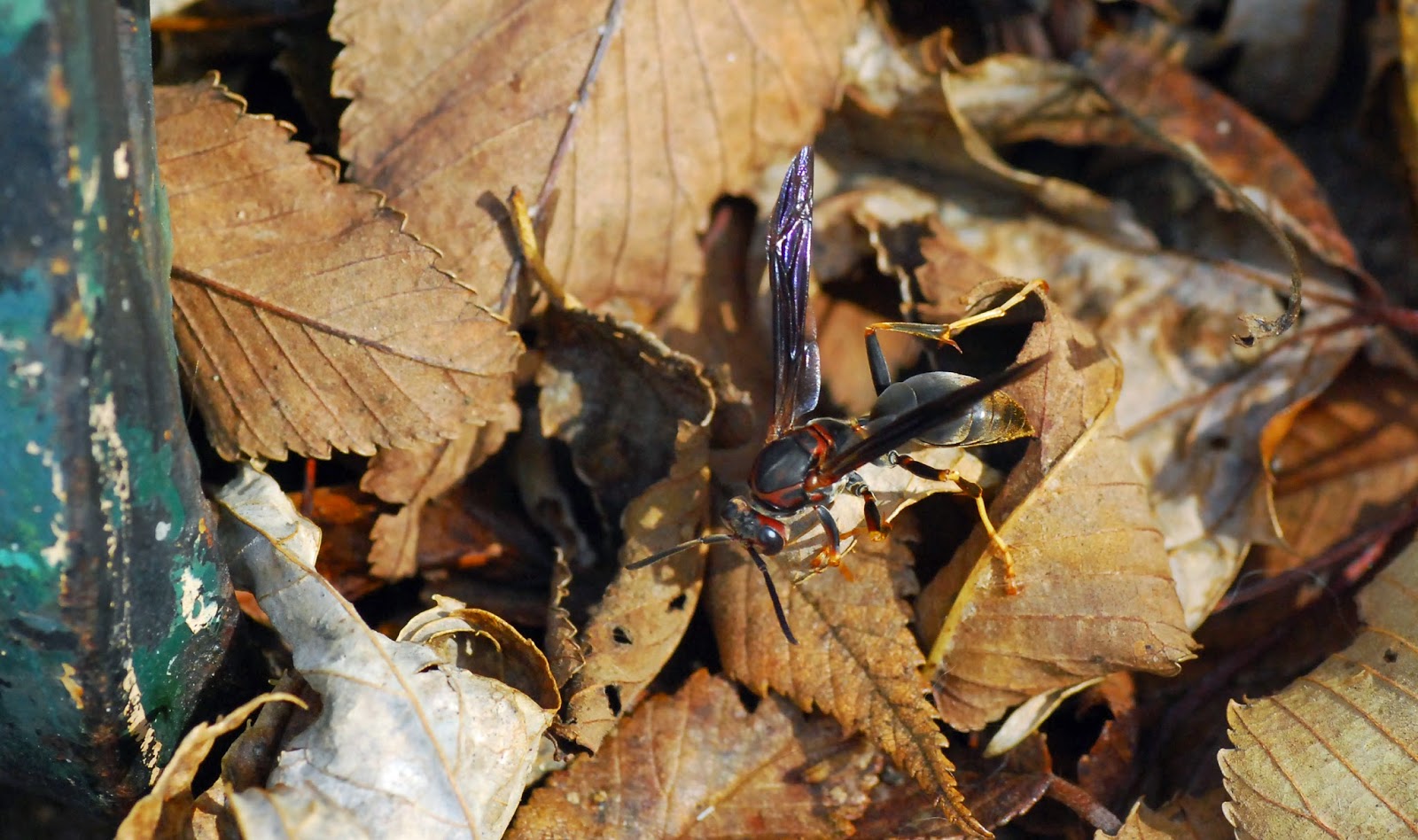 Reaching lengths up to 21 mm (or nearly 1 inch) makes them a fairly large wasp. There are four recognized color forms of this species depending upon the region where they are found. In our area, females are darker in color than males and have a reddish colored face. Males appear in late summer and early fall and will have a greenish-yellow color with greenish colored eyes. Males cannot sting as they lack a stinger. They do not protect the hive, or feed the queens offspring therefore they do not need stingers. Their only purpose is reproduction. Once mated the males will die and so will any females that have not reproduced. Newly bred queens will overwinter in leaf litter, under rocks, under the bark of trees or any sheltered area out of winters cold temperatures. 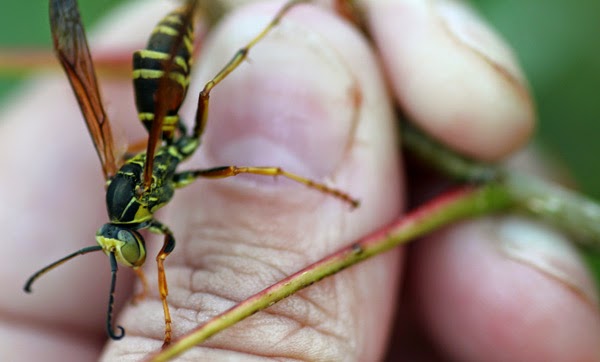 (A harmless male hanging out on my hand last fall)

Adults feed on nectar and sugary foods such as apples, grapes and other fruits. They will also show up at Oriole and hummingbird feeders. The females responsible for rearing the young will seek caterpillars and other soft bodied insects that they will chew up and feed to the developing larvae. This preference for caterpillars and other pests helps control nuisance insects like a wide variety of moth caterpillars that may feed on corn, soybean, cotton and other agricultural crops. Biological control at it's best. 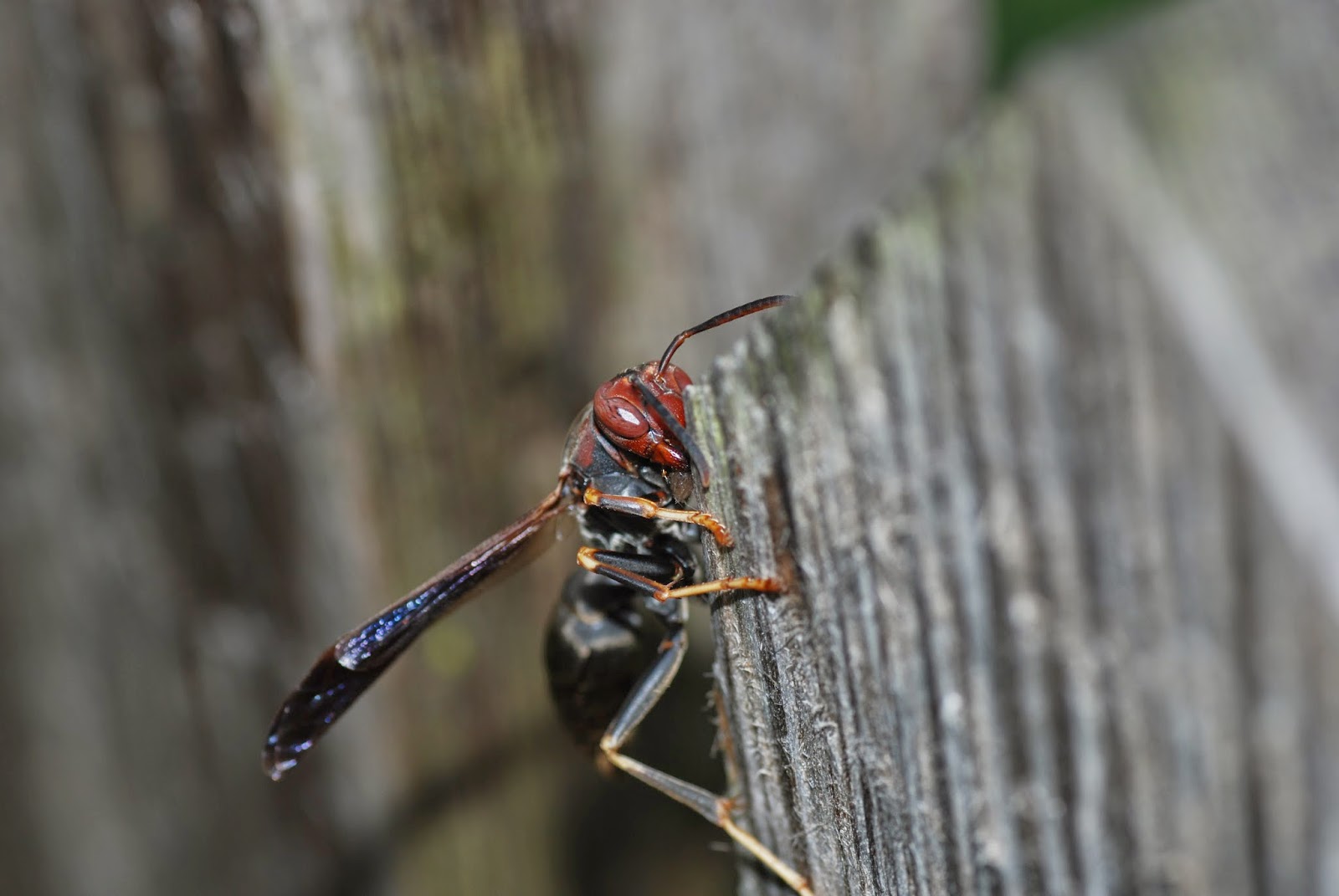 Females chew wood to utilize in making their nests. They will tear off tiny pieces of wood and chew it in their mandibles with a mixture of water they've collected that makes it malleable and easy to form into the distinctive hexagon-shaped papery nests we are all familiar with. Some of these nests may contain dozens, if not hundreds of protective females and additional dozens of larvae. Members of the same nest recognize intruders by how they approach the hive and will chase off any wasp that does not belong to their colony. If a wasp approaches the hive in a rapid, purposeful manner it is assumed she belongs there. If a wasp hovers in a slow manner near the hive, it is assumed she does not belong and is treated accordingly. If the intruder manages to get past any females guarding the nest, her visit won't last long. Usually within a few minutes her presence will have been found out and she will be aggressively invited to leave.

Towards the end of summer the queen will release a strong sexual pheromone, made of venom, on the hive once it has been deserted. This intoxicating "perfume" will send the males into a mating frenzy. Males will perch on a higher platform basking in the sun, waiting for reproductive females that they can force their attentions upon. Females will struggle against the males and sometimes escape their grasp, only to find themselves pursued again and forced to submit to the males attention. 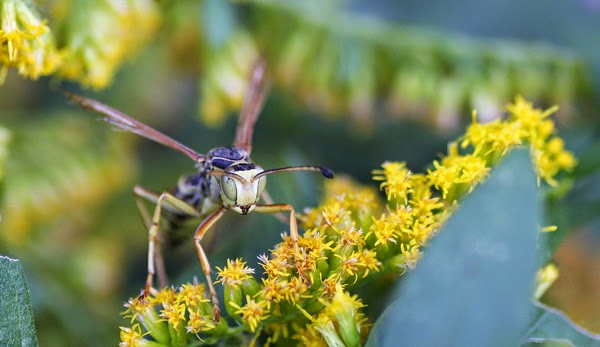 Once mated, bred females look for sheltered areas to spend the winter. In spring she will join aggregates with other bred queens for a period of time before they disperse and begin hive building. The initial offspring of the queen are all infertile females, later males will be produced followed by reproductive females and the cycle will start all over again.

While stinging insects are rarely anyone's favorite insect; and if these wasps decide to build their nest right outside your back door or some other location where you will be in constant contact with them, destroying the nest may be the only option to avoid painful stings. However, if the hive is safely away from human contact, they are best left alone. They are excellent pollinators, great biological control and should be considered beneficial to humans. 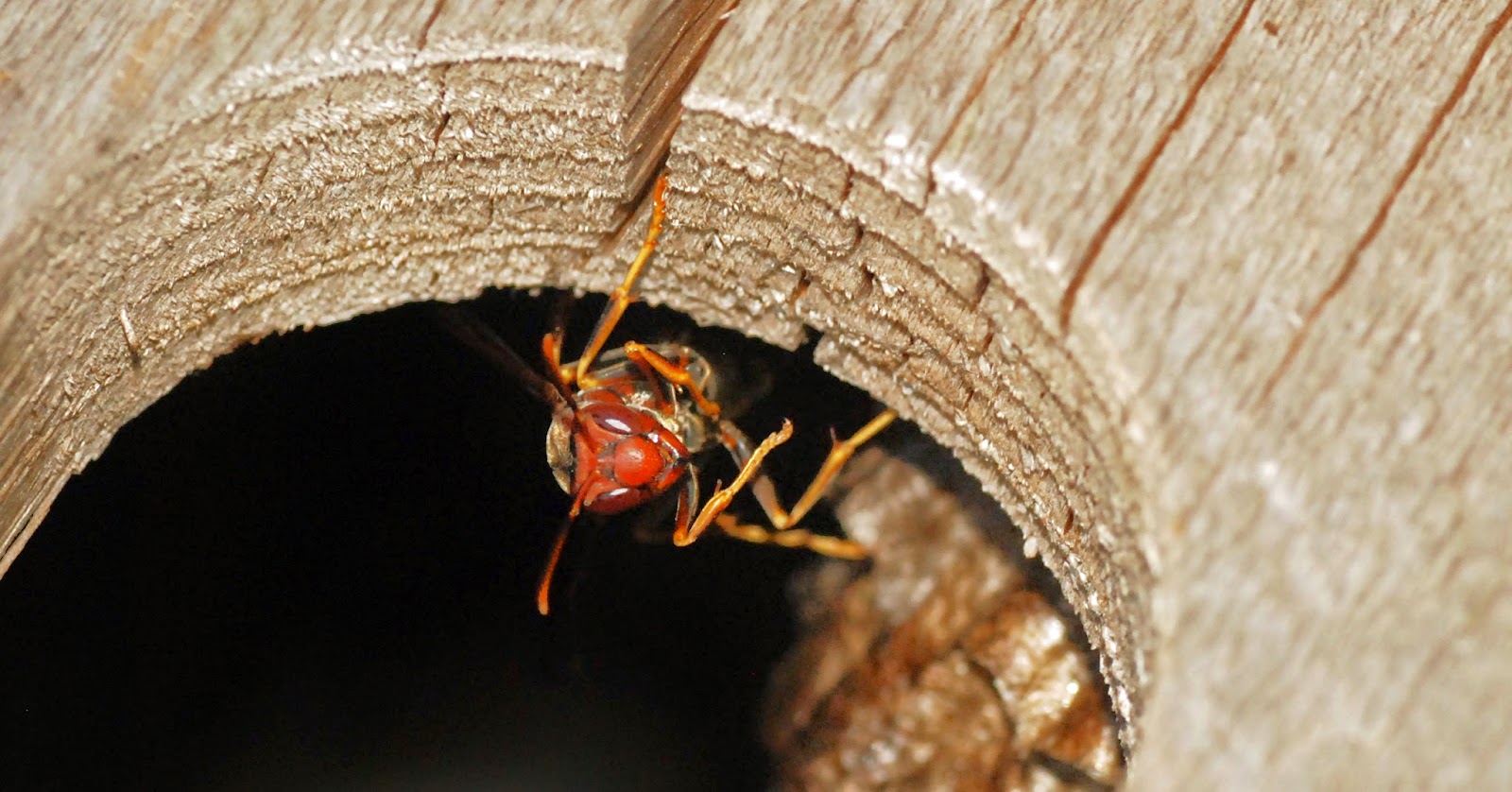