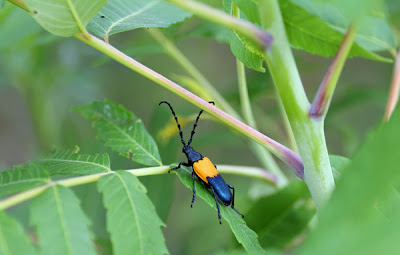 The Elderberry Borer or Cloaked Knotty-Horned Beetle as it is sometimes referred to (Desmocerus palliatus) is found in North America from Oklahoma to the Appalachian Mountains. They are found more often in the northern portion of their range in marshy, swampy areas where their host plant, elderberries, occur. This small to medium sized beetle reaches lengths up to 26 mm without antennae. They are a gorgeous colored beetle with iridescent bluish wings and  a vibrant yellow or yellow-orange band across the upper portion of the wings. The middle segments of the antennae have distinct knobby points which earned them the common name of Knotty-Horned Beetle or Cloaked Knotty-Horned Beetle. They are unmistakable and not to be confused with any other species as no other beetle carries such vibrant, unique colors and pattern.

A couple of years ago I became acquainted with a woman named Annie Ray who did her doctoral work on beetles in this genus. Her project was centered around the pheromones produced by the female of this species and how the male homes in on her scent. As part of the research we had to dig down into the roots of the elderberries and break open the root masses looking for larvae or pupae. 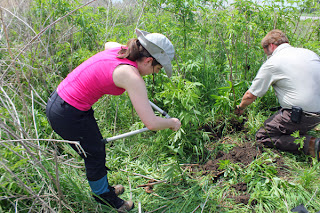 The objective was to find them in this stage, because when they were located as adults they would not work for her research purposes. In essence she needed the virginal females. This all sounds easy in theory, but I assure you in practice it is much more difficult than you would expect. We were working in 90 degree temperatures often in full sun. We had experienced recent rains, which made one of our locations extremely muddy and digging in soppy, water-logged soil was pure torture, especially with the beating sun baking your skin. I became very adept at using shovels, spades, axes and limb loppers. 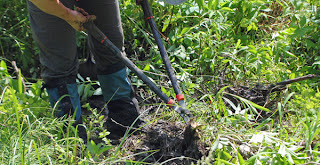 Careful was the word of the day. It was all too easy to accidentally cut a larvae or pupae in half. This was enough to bring you to tears, to have worked so hard to find one, only to realize you destroyed it before you could get it out of its pupal chamber. Often we would work for as much as an hour before finding a single specimen. 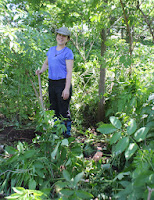 Each discovery brought excitement. It really is true that the things we work the hardest for bring the greatest joy, because each time we found one of these elusive larvae or pupae you would have thought we struck gold at the amount of excitement we expressed. Annie spent three days here in NW Missouri working at several different locations, including Squaw Creek NWR, where she was given permission through an application process to search for these beetles on the refuge. All told she went home with 7 specimens. Not near the number we were hoping for, but ever the optimist she was grateful to not have been completely skunked. The beetles were safely ensconced in vials and packed for airplane travel to Ohio. From there they were to be shipped to California to her research assistant to begin extracting pheromones from. 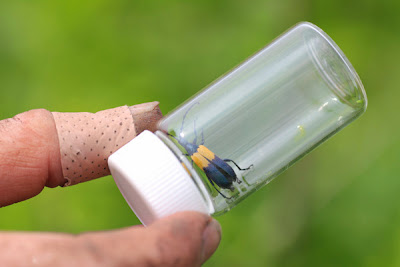 Females of this species will begin "calling" for males as soon as they emerge from their underground pupal cell. Males come from great distances drawn by her scent and mating takes place immediately. We were certain that each adult we found had already been mated because of how rapidly this activity takes place once the females leave their pupal chamber. Females lay their eggs at the base of elderberry bushes, and the larvae will burrow into the roots or stem bases to feed. When they are ready to pupate they will travel to the soft, pithy parts of the branches, often near the roots and form a pupal cell. They emerge in early spring. Timing is everything when you are seeking to find these beetles before emergence. Literally it had to be timed so that we were digging and searching a few days prior to when we thought they would be coming out of their underground chambers. Once the adults are plentiful, your window of opportunity is gone.

These beetles are not known to cause any significant damage to the elderberry bushes. They do not occur in large enough numbers to wreck havoc. As adults they feed on the pollen in spring.Finding these beetles is not always easy, but once you've found one they are sure to leave an impression with their beautiful color and substantial size. Look for elderberries in full bloom in the spring and with any luck you will be awarded with the sight of one of these gorgeous beetles.