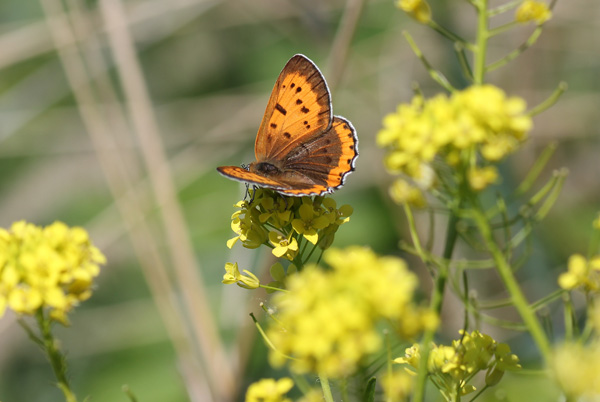 Bronze Copper (Lycaena hyllus) butterflies are one of the prettiest butterflies to call Missouri home. They are the most beautiful coppery orange with spots of black. They aren't large (2 inch wingspan) and flashy like Monarchs or Swallowtails, but what they lack in size they make up for in bold color and approachable dispositions. Underside of the forewings of both sexes is orange with black spots; underside of hindwings is gray-white with black spots and a broad orange outer margin.

They are typically associated with marshes and wetlands where the females will use curly dock or smartweed as the host plant for her caterpillars. I photographed this one at Squaw Creek NWR which is a large wetland in NW Missouri. 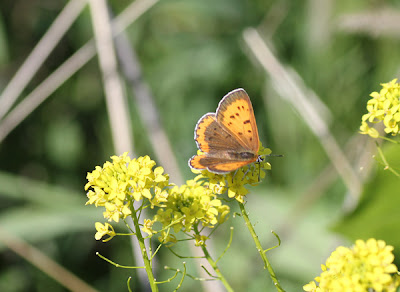 Males will perch on low lying plants and wait for passing females. Once mated the females will lay their eggs on the underside of the host plant, typically choosing the largest leaves as a prime feeding area. Depending upon your area and the temperatures, they may produce 1 to 3 broods per year. In Missouri I would suspect two broods in the northern half of the state and perhaps three further south. Their numbers seem to be secure, although not common in Missouri. In parts of their range however they are rare or even considered endangered. This is presumably because of loss of habitat. With more and more wetlands, and marshes being drained for stripe malls, housing additions and agricultural ground, prime real estate for these beauties is hard to come by. Even though their host plant is in abundance, there must be other requirements that this species needs in order to survive and be prolific. Second or third generation offspring will overwinter in the egg stage and hatch the following spring. The adults will die soon after mating and laying the eggs of the final generation that season.

In 1766 the first Bronze Copper was believed to be collected by the Dutch naturalist Pieter Cramer. It wasn't until 1775 that is was officially described and given a name.This species has suffered somewhat of an identity crisis over the years. It has went from being listed as
Hylloycaena hyllus,  then Lycaena thoe, and Chrysophanus thoe – and finally Lycaena hyllus. That is one of the most difficult things about learning scientific names, all the changes!