Joey and I made an impromptu trip to Springfield, MO to do some antique shopping and to visit with a fellow blogger and friend named George Sims of Bugs of Booger County. George had told me about a fellow neighbor who has a woodland pond full of newts and tadpoles. I was anxious to see the pond and to capture some newts. Unfortunately I had forgotten my muck boots, but lucky for me George was willing to wade in the pond and capture some for me. 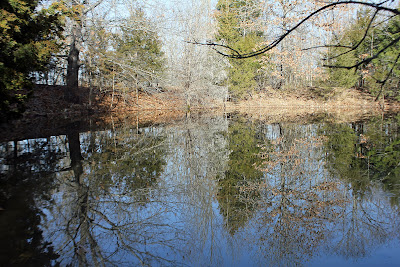 The setting of the pond is so beautiful and serene. The water was like glass as it reflected the images of the trees on its surface. George worked his way round the ponds shoreline and  used his handy-dandy strainer to scoop up leaf-litter near the shore. Each time he had either a newt, aquatic insect or a tadpole. 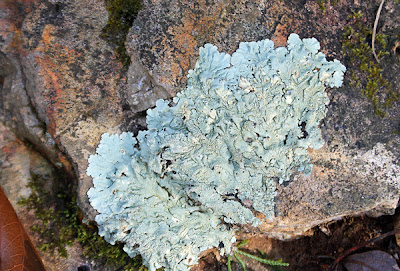 I enjoyed walking around the pond and photographing the various lichens and mosses that were very plentiful in the woodlands. Their textures are so beautiful. 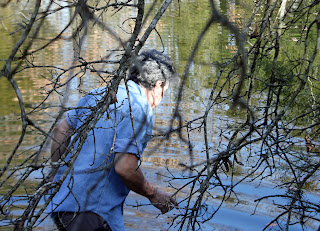 Here is George sneaking up on his quarry. His technique seems to work because I now have 8 newts to bring home with me. I will keep 5 and 3 of them will be turned over to MWSU for their voucher collection of herps. They will be preserved and used for future classes as a teaching tool. The pond was a brisk 57 degrees as George bravely tromped and sloshed through it in shorts. The air temperature however was absolutely gorgeous at 74 degrees on the first day of MARCH!
Central newts (Notophthalamus viridescens louisianensis) are a common occurrence in the Southern half of Missouri, but up in the northwest corner where I live they do not occur at all. So these are a real treasure to me. We will be heading home tomorrow with my new little friends. Hopefully they will do well for me and survive. Central newts are small at only 3 to 4 inches as adults. They have a somewhat unusual lifecycle. Males locate females and approach them with the intention of mating. He will grab the female and hold onto her tightly in a position called amplexus. He may remain wrapped around her for several hours all the while using his tail to fan a delectable scent called a pheromone in her direction. He wants to make sure that the smell reaches her nostrils and has the desired affect of making her receptive to receiving his spermatophore. He will release her and perform a dance of sorts in front of her, if she is interested in finalizing the mating process she will rub her nose against his body or tail. It is then that he deposits his spermatophore on the bottom of the ponds edge or other shallow water. He will try to guide her to his packet so that she can take it up into her body via her cloaca or vent. If she is not impressed with his attention she will turn tail and run. 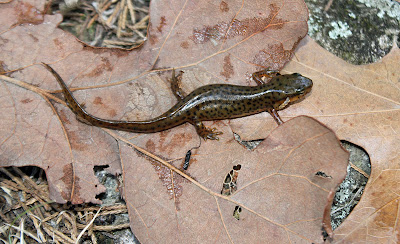 Once mated she will lay up to 400 eggs one at a time on aquatic vegetation. It will take her several weeks to complete the task of laying eggs.  When the eggs hatch the newly born gilled aquatic larvae will remain in the water. By late in the season (August) they will transform into juveniles called efts, they lose their gills, and have formed lungs. They will leave their watery home and head to land. They will live on land for 1 to 3 years depending upon subspecies and location. While on land they will be reddish or brown in color and have a rounded tail. They also lack any evidence of sexual maturity. Once they return to the water at 2 to 3 years of age they will make a transformation into the adult form and become sexually mature. They will then begin seeking mates. 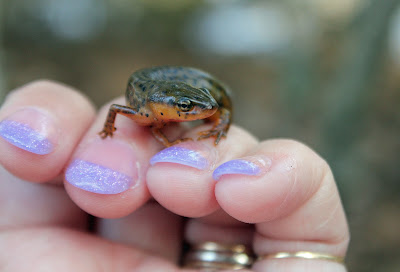 The adults are olive-brown  on their back with a bright orange-yellow belly. There are numerous black spots on the belly and there may also be red spots ringed with black on the back or along the tail. The color division between the belly and the back is definitely noticeable. There are some specimens that lack the spots or have very few spots. 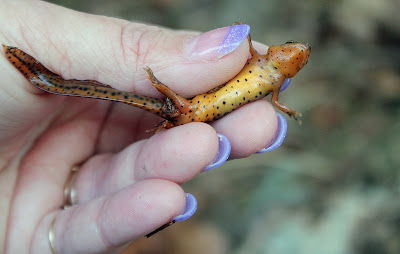 They can be found in woodland ponds, swamps and roadside ditches that hold water. They are rarely found in large numbers in ponds that also contain fish, as fish are fond of the the newly hatched newts and the newts would stand little chance of surviving. Newts feed on worms, small crayfish, tiny mollusks, small tadpoles and even salamander larvae. As terrestrial efts they feed on small snails and insects. On land they hide out under leaf litter and logs or under rock piles.
These little salamanders are active year around in their aquatic habitat and are often seen swimming around under the ice of the pond they inhabit. They may be active during the day or night. Efts and the adults have few predators because of a toxic secretion they produce from mucus glands located all over their body. These secretions can be deadly to some animals. The efts are thought to be up to 10 times more toxic than their adult counterparts. 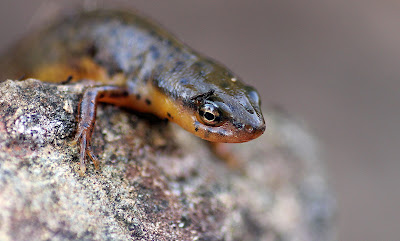 As we walked around the pond and explored the area, we noticed hundreds of tadpoles. We recognized some as Green Frog Tadpoles, but many others were hard to distinguish as they were much smaller, they could have been a younger generation of green frogs. After finishing collecting our newts we left the pond and headed back to Georges house. We sat on the front deck and we treated to a beautiful view of the rolling Ozark hills. 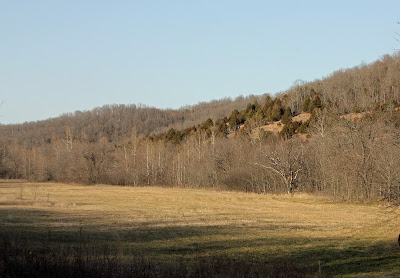 George's dog Dobbie was happy to have company and stayed close by and offered up lots of kisses and affection. 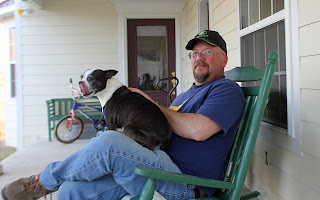 We hope to make a trip back to this beautiful area and visit with George and his wife again. Perhaps kayaking the beautiful streams and rivers that the Ozarks have to offer. Or hiking and searching for bugs or snakes. Our antiquing hasn't proved very productive yet, but as we drive home tomorrow I hope to get in some more shopping. If you would like to read Georges post about our little adventure please visit his blog Bugs of Booger County.
Posted by Shelly Cox at 10:34 PM