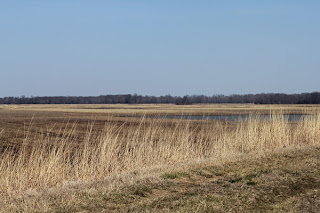 Fountain Grove Conservation Area in Meadville, MO is a beautiful wetland area in NW Missouri.
It is located approximately 20 miles southeast of Chillicothe. Last week I helped out with a two day annual event called "A Day in the Wetland." The first day I had a volunteer by the name of Bradley assisting me. We were in charge of the station on food chains and predator/prey relationships. We had a bald eagle nest nearby that allowed us the opportunity to discuss the history of the bald eagle and the ultimate success story that it turned into. This segued into predators and prey. Then we talked about mammals and used different skulls to aid us in showing the skull structures that make them a predator or prey. We even had a snake with us and discussed how they are both predator and prey. Bradley stumbled upon a coyote carcass not too far from where we were stationed. I investigated and discovered lots of living creatures taking advantage of the available food source.

We showed the children the carcass and explained how animals die from various causes and those dead animals provide food for various other animals. We flipped the carcass over and showed them the bugs, including margined carrion beetles that were mating within the cavity of the coyote. 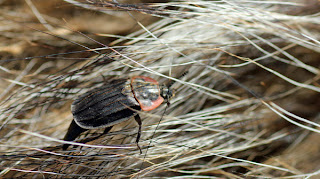 The Margined Carrion Beetle (Oiceoptoma noveboracense) is found throughout the Eastern United States with exception to Florida and can also be found in Texas and Louisiana. Another similar species the American Carrion Beetle is bigger and the pronotum is greenish-yellow instead of pinkish-red. The margined carrion beetle grows to about 3/4 of an inch. They are commonly found near deciduous hardwood forests. Carrion beetles are not the most pleasant insects in the world of bugs, but they certainly perform one of most important services to mankind. They are the clean-up crew. Not only do many species of carrion beetles either in the adult or larval stage feed on decaying carcasses, they also help control insect pest populations. This is done by the habit that many species of carrion beetles have of feeding not on the carcass itself, but on the maggots of the flies that are there to feed. This species is known for such behavior. The adults will sometimes feed on maggots. The larva feed on maggots, decaying fungi and carcasses. The female will lay her eggs on the unfortunate corpse. The young larva will feed on the carcass or the maggots for as long as the food source lasts. Eventually they will fall to the ground and dig themselves an underground chamber. Within this chamber they will pupate and finish their life cycle. The female will continue to fly from carcass to carcass laying eggs and feeding. The very flattened design of their bodies is no accident. This flattened, flexible body allows them to maneuver under dead bodies. While the thought of eating dead flesh is revolting to us humans, fortunately for us carrion beetles thrive on it. Try to imagine a world overrun with rotting stinking dead flesh and no beetles to help in the disposal of the offensive mess. Plus we get the added benefit of nutrients being released back into the soil from the feeding habits of these beetles. Forensic scientists use these beetles as a means of determining the time of death of human corpses. They can often times figure out the time of death just by the beetles or other insects present on the carcass. As each individual species will show up at very specific times to feed in very specific ways. Some are attracted to the carcass itself, still others are attracted to the insects present on the body. Some prefer fresh (if there is such a thing)dead flesh, still others prefer their meat a little putrid.

Other invertebrates were present as well, including two spider species. One was a crab spider and the other a spider in the genus Enoplognatha. 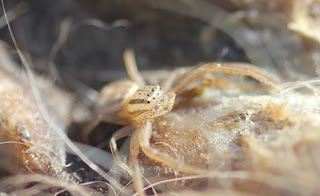 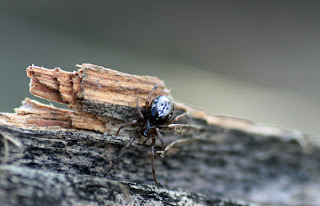 I guess the spiders were present to take advantage of the other insects that were there to feed on the carcass. It seems pretty opportunistic to me and certainly can't blame them this time of year when food sources are low.


All-in-all it was a successful two day event, until the last day, and the last group of kids came through and discovered the coyote carcass and decided it would be fun to play toss-carcass and began throwing it at each other. This eliminated all the bugs that were present and ruined our chances of using it for education....but kids will be kids!