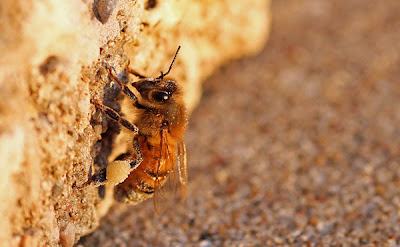 After several days of unseasonably warm weather I decided to check on the honey bees to see if there were any bees buzzing around. I was pleasantly surprised to find them busily cleaning house and gathering pollen. I admit to being shocked about the pollen gathering though. I wasn't aware that there were plants or trees producing pollen in January in Missouri. As you can see by the back legs and the tip of the abdomen on this worker to the right she has been quite busy. The pollen they were gathering was very pale in color, almost white. If anyone has any idea what plant or tree might be producing pollen this time of year, please let me know. I am curious.

I sat and watched the bees for about 30 minutes and found it very relaxing to observe them in their daily activity. Workers would fly out of the hive, and return several minutes later, laden with pollen. Some workers were met at the entrance of the hive by additional workers that would quickly feed them a bit of pollen, before they entered the hive.
Then I noticed several dead bees on the ground below the hive entrance. I assume these are the workers who perished over the last few weeks. They had been swept out the door of the hive; one thing any self-repecting honey cannot abide by is a messy hive. Dead bees would definitely qualify as dirtying up the hive. 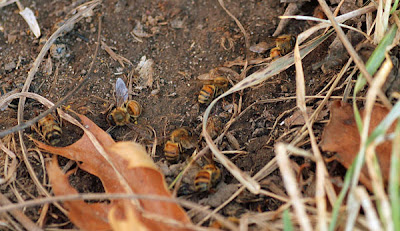 Upon further observation I noticed a bee come in for a landing at the entrance, it was not carrying pollen as it slipped inside. It wasn't long before this intruder was rudely escorted out of the hive, onto the ground and stung repeatedly before succumbing to death. The message was loud and clear "Don't come around here, you're not welcome!" 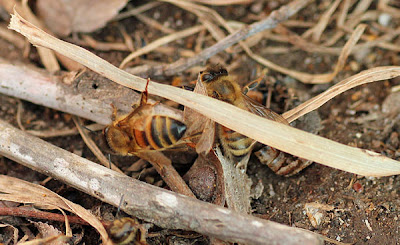 (The worker on the left was one of my bees, the one on the right under the blade of grass is the "robber" bee)

Honey bees will often try to invade the hives of other bees to steal their stores of honey and pollen. The intruders are often quickly detected by scent alone. The robber bees will smell different than the members of the hive and are quickly deposed of. To me it seems a folly on the part of the robber bee, why sacrifice yourself to try and steal some honey? Do the robber bees think it would be easier to risk life and limb, than to gather their own pollen or nectar? Granted this time of year their choices are limited, but still, is it worth dying over?

Occasionally I had to laugh as the bees would fly in to make a landing and seemed to judge the distance all wrong. These bees would crash into the hive, or into the grass around the hive, or sometimes into each other. One little worker crashed into her fellow hive mate, and spun herself around and quickly caught her balance by grabbing her sister bee. It was quite comical, as she held on as if her life depended on it. I am sure she experienced a moment of WTH just happened!? After several seconds she regained her composure and flew into the hive. Silly bee. 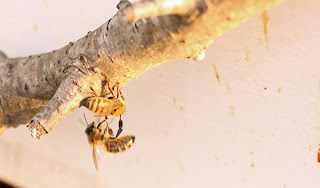 I am so excited to see that the bees are doing so well. I realize we have had a mild winter up to this point and that it will most likely change soon. My hope is that they continue to do well and survive any harsh weather that the winter is still likely to throw at us. 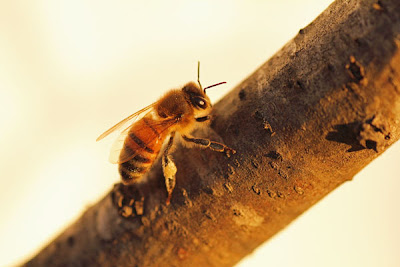