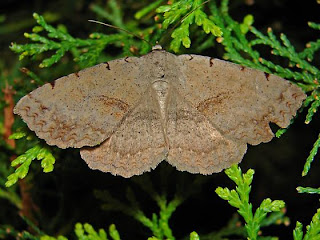 This little gray moth is called the Moon-Lined Moth(Spiloloma lunilinea). They are found in deciduous hardwood forests and nearby areas. Commonly found in Missouri they are attracted to sap flows and sugar bait. The caterpillars use Honey Locust trees as their host plant. The distinctive lines on the edge of the forewings help identify this species. It is not unusual to see these moths at porch lights or other artificial lights at night. Moon-lined moths are located throughout the Eastern and Central portions of North America. 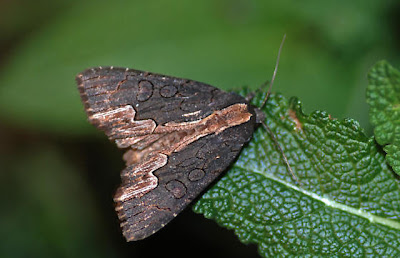 The American Birds-wing (Dypterygia rozmani) is found throughout Eastern North America from Nova Scotia to Florida and back west to Texas. They are a medium sized moth with a 2 inch wingspan. When the wings are in flight the fine black lines and pale coloring visible on the wings resembles a bird in flight which is where the moth gets its common name. This is the only moth in North America with this marking. They are found in woodlands and nearby areas. The adults most likely do not feed, and the caterpillars are reported to feed on Dock and Smartweed. 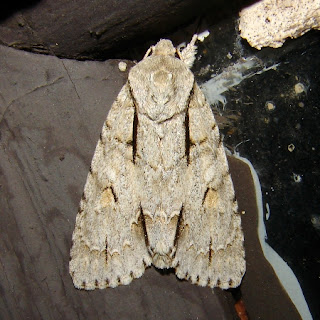 The interrupted Dagger Moth (Acronicta interrupta) is found from Colorado eastward, then north to Nova Scotia. This is a medium sized moth with a wingspan up to 2 1/4 inches. They are light gray with a prominent black basal dash, up and down the median lines. There is also a thin black streak through a dark patch (dagger-mark) in the anal angle. This moth is associated with dry deciduous forested areas, and tall grassy/shrubby areas. The adults most likely do not feed. The caterpillars use elm, cherry, apple, crabapple, birch, hawthorn, apricot, plum, willow as well as many others as their host. 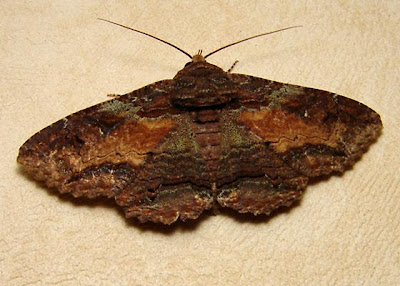 The Lunate Zale (Zale lunata) is a common moth in Missouri and are often seen at porch lights at night. They range throughout Eastern North America. This is a small moth with a wingspan up to 1 3/4 inches. The wings are dark brown with blackish-brown markings. They are associated with deciduous hardwood forests and nearby areas. The adults will come to sap flows and sugar bait. The caterpillars feed on cherry, oak, willow, maples and many others. 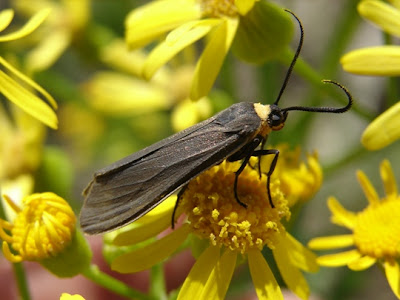 Yellow-Collared Scape Moths (Cisseps virginica) are tiny moths with up to a  1 inch wingspan. What they lack in size they make up for in color. These moths are dark charcoal gray to black with a brightly colored thorax, that will either be orange, reddish-orange or yellow. They are commonly found among wildflowers in open fields, meadows and prairies. This moth is diurnal....meaning it flies during the day. This is unlike most moths that are night fliers. The adults nectar at flowers and the caterpillars feed on lichens, grasses and spike rushes. 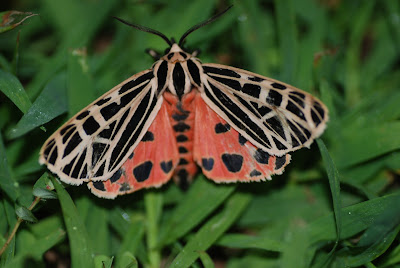 This brightly colored moth is a Virgin Tiger Moth (Grammia virgo).
This moth has a scattered population in the Southern and Eastern portions of the United States. The one pictured here is only one of two I have ever seen. It came to a mercury vapor light I had out to attract insects. These are a medium sized moth with a wingspan up to 2 1/2 inches. The forewings are cream colored with black lines, and the hindwings are bright orange-red with black markings. This species is associated with woodlands. The adults will sip nectar, and the caterpillars use lettuce, plantain, clover and other low growing plants as their host. Like all caterpillars in the tiger moth family, they are referred to as woolly bears. This particular species has one of the fasted moving caterpillars I have ever encountered. It literally looks like it is sprinting as it move across the ground. 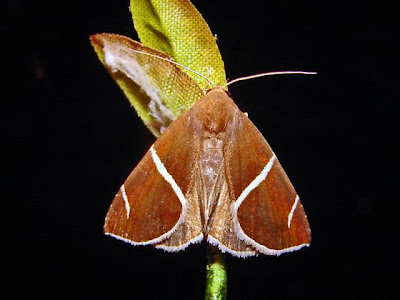 This lovely chocolate colored moth is the Short-Lined Chocolate Moth (Argyrostrotis anilis). They are found throughout Eastern North America from Nova Scotia southward. Not much is reported on their life cycle. The caterpillars feed on
crabapple.
(Picture by Steve Scott)
There are at least two generations in Missouri in each year. 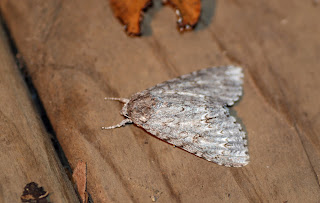 This lovely light gray moth is the American Dagger Moth (Acronicta americana). They are medium size moth with a wingspan up to 3 inches. The wings contain wavy lines in a variable pattern. They are associated with deciduous hardwood forests and nearby areas. The adults most likely do not feed and the caterpillars use alder, hickory, ash, willow, polar, elm, birch and other as their host. This particular species is the largest of the dagger moths in North America. 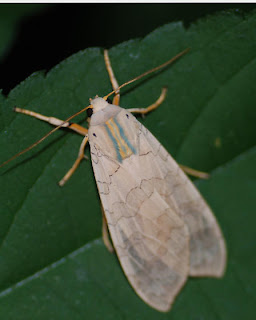 Banded Tussock Moths (Halysidota tessellaris) are a beautifully marked moth with distinct aqua blue and yellow﻿ striped on their thorax. They are average in size with a wingspan up to 2 inches. Look for them in deciduous hardwood forests and nearby edges. The adults regurgitate decaying plant matter that is high in alkaloids, and then drink up the fluid, which gives them additional toxins as adults. 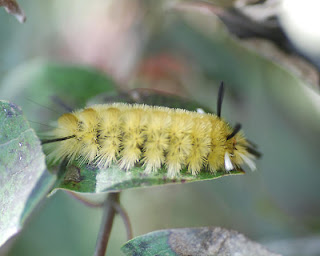 The caterpillars use birch, elm, willow, ash, walnut, hackberry, grape, alder, hazel, and oak for their host plant. These plants give the caterpillar a chemical protection from predation by forming distasteful toxins in its system. Most predators would avoid eating this species.
This moth will come to porch lights at night.
All of the moths shown here are found throughout Missouri and most of them will come to porch lights at night. Moths are easily seen and easily captured for study and for collections. Moths are often over looked as being drab and not worthy of our time....after all they are not near as colorful or beautiful as their distant cousins the butterflies....or are they? Many moths are quite colorful and most are beautiful in their own right. Some fly during the day just like butterflies and are often mistaken for them. Soon warm weather will return and so will the moths that have been overwintering in various stages of development. Some as cocoons, some as caterpillars and some as full grown adults.
Many cultures view moths as supernatural beings, and believe that their departed loved ones were encased in the body of the moth as it fluttered about ghost-like in the night sky. Who knows, maybe, just maybe......we ARE being visited by past loved ones when these moths show up in our yards at night. I'm just sayin..."it could happen"
Posted by Shelly Cox at 3:09 PM