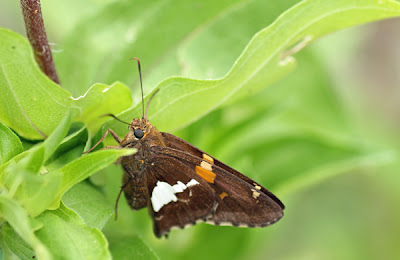 Silver-spotted skippers(Epargyreus clarus) are without a doubt the single most widely seen butterfly around the Midwest. When I photographed these butterflies there were no less than 20 or 30 of them nectaring at the zinnias.
They are quite large for skippers and have a wingspan up to 2 5/8 inches. Their color is a distinct all over chocolate brown with bright white (or silvery) spots on the underside of their hindwings. Forewings have golden spots.

The adults perch on the underside of leaves during the hottest days of summer and at night. During milder weather they will nectar at a wide variety of flowers, but seem to prefer flowers colored red, pink or purple. Rarely will they nectar at yellow flowers. They can be found in flower gardens, near woodlands, and in open fields. 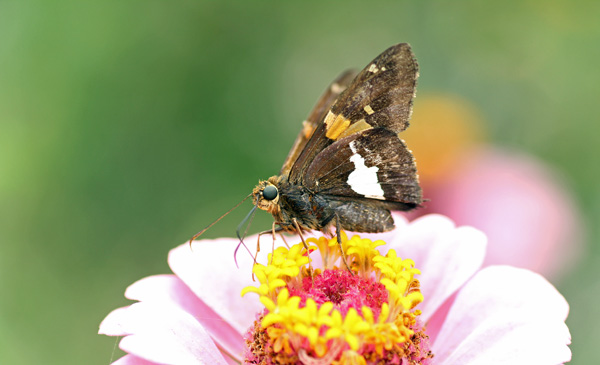 Males perch on tall plants and wait for passing females, occasionally they may patrol seeking females with which to mate. Some experts claim that once mated the female will lay single eggs near, but not on the host plants. Caterpillars must find their own way to the host. Other experts argue the opposite and claim they lay their eggs on the host. So it depends on who you ask or what resource you use.  Host plants for the caterpillars include Honey Locust, Black Locust, False Indigo and various other Legumes such as Glycyrrhiza and wisteria as the one pictured below was feeding on. 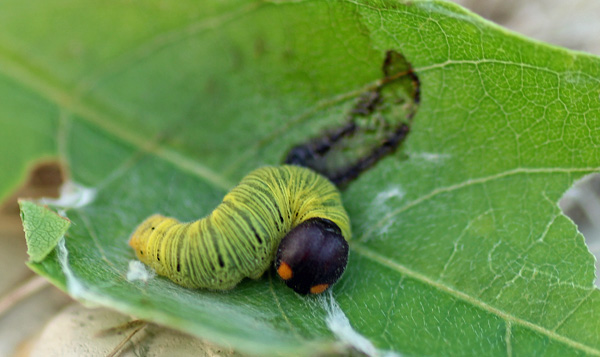 The caterpillars rest inside rolled up leaf shelters that they create by silking together leaves. They will regurgitate a greenish colored, bitter-tasting chemical defense when disturbed. The sphecid wasp, Stictia carolina, also sometimes provisions its nests with silver-spotted skipper larvae. Frass (insect poo) is often a sign to wasps that the caterpillars are present....therefore the caterpillars have the ability to project their frass great distances in order to not advertise their presence to would-be predators. I've heard of projectile vomit, but projectile poop? How ingenious! When the caterpillars are ready to pupate they will remain inside the leaf roll and form their chrysalis. They overwinter in this stage.