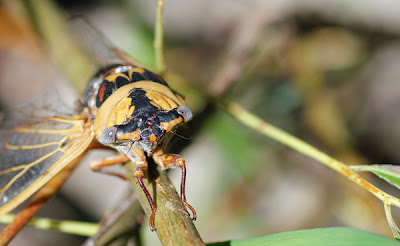 Prairie Cicadas (Tibicen dorsata) are a large and very common cicada in Missouri as well as throughout the Midwest. They are beautifully marked with caramel and black. The wings are deeply veined and held over the back. These insects are powerful fliers and sound like military bombers as they buzz by your head.
Males call loudly from the trees or other vantage point. They are using their best Sinatra serenade in the hopes of attracting a nearby female. Males who sing the loudest and proudest are sure to gain the privilege of mating with the most desirable of the local females. Once mated the females will lay their eggs on or near trees. When the eggs hatch the nymphs must find their way underground where they will remain for one to two years feeding on the roots of trees, shrubs and other vegetation. Damage to plants and trees is minimal and is not likely to cause any noticeable problems. The adults reportedly feed on the sap of trees and plant juices. 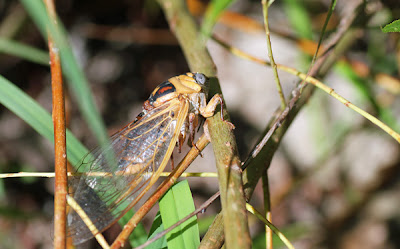 These insects are often called Locusts, which is truly a misleading term. Locusts are actually a type of migratory grasshopper that are famous for forming extremely large swarms that devastate crops and grasslands. In the United States the Rocky Mountain Locust was responsible for mass destruction of prairies, cropland and other vegetation during the 1800's. The last specimen found alive was in 1905 somewhere in Canada. Africa still wages war with locusts each year, and DDT is still widely used in an attempt to control their devastation.
Cicadas are not closely related to grasshoppers at all, in fact they are in the order Hemiptera and are more closely related to leaf hoppers, or even stink bugs than they are locusts.
This particular species of cicada is also known as a Dog-Day Cicada, and are so named because of their appearance during the hottest days of summer. The songs of these creatures from high in the trees is synonymous with summertime. All too soon their song will cease and the brisk fall weather will be upon us. 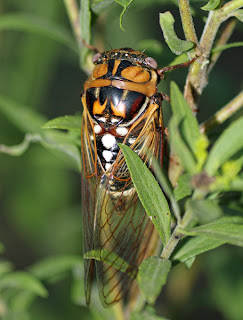