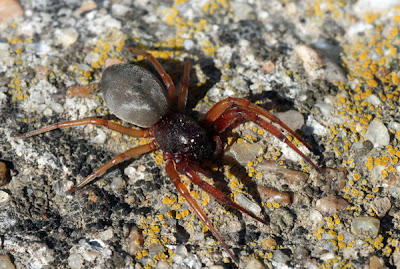 This multi-colored beauty has been identified as a Ground Sac Spider (Genus: Trachelas). This particular specimen is a female and she made her way into my in-laws house and managed somehow to make her way into my father-in-laws shirt unbeknownst to him. While trapped between the shirt and his back she bit him. He shook his shirt out to see what had bitten him and discovered this spider. He was concerned it could have been a brown recluse so he captured her and brought her to me to be identified. I was able reassure him that it definitely was not a recluse, but I had no idea what it was beyond that. It left a nickel sized welt on his back that itched for about 2 hours before disappearing. After posting this picture to facebook Mandy was quick to respond and provide a positive ID. When I mentioned that the spider bit my father-in-law she seemed shocked that this spider would bite anyone and considered it extremely rare that it did. The venom from this spider is harmless to humans and is designed to subdue their small insect prey. This spider commonly enters homes, but generally speaking it is the males that do so. Joe Lapp another spider expert explained that these are wandering spiders and the males are on a mission to find females. This quest to locate mates often leads them into homes by mistake. He even created a cartoon that aptly describes this misguided behavior. In the cartoon below the male ground sac spider aimlessly wanders around, in and out of this house seeking his quarry before finally finding her in a cherry tree. 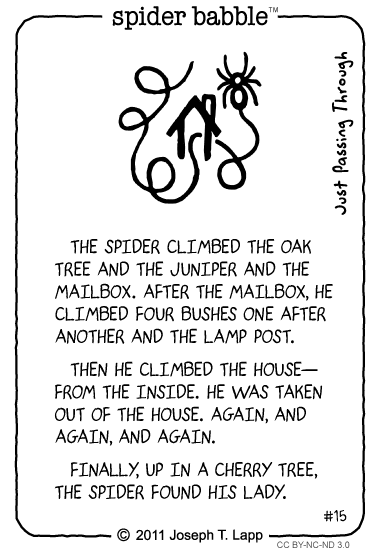 Joe has a wonderful website full of cartoons that humorously describe the behavior of spiders and their relationship to humans. To read more of his cartoons please visit his website Spider Babble.
Joe pointed out to me that the common name of "Ground sac spider" is probably not the best descriptive name for this genus of spiders as some species are often found in trees. Trachelas tranquillus are commonly found in leaf litter on the ground so this is probably what earned them their common name.  Also, I see that some web sites are referring to this species (or genus?) as the Broad-Faced Sac Spider, which seems like a good name to me.These spiders are also considered ant-mimics and looking at this particular specimen I can see how that would be the case. They are rather ant-like in their appearance. 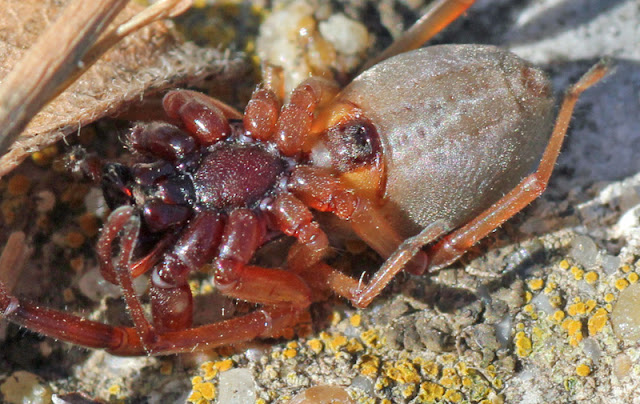 Identifying spiders is often a challenge even for the experts and often requires microscopic investigation of the genitals before an accurate ID can be achieved. Having learned this bit of information from several spider experts I always try to make sure to photograph the underside of the spiders I find. This is often a tricky endeavor and requires patience as spiders apparently do not like being on their back. I flipped this little gal over several times with a dried piece of grass before she finally seemed to realize I was not going to stop flipping her until she laid still. After several seconds of motionlessness I was able to snap 4 or 5 pictures before letting her right herself and wander off.
Mandy said that in many cases a photograph is enough to identify to species, but in the case of this particular spider there are two species that are so similar that it requires microscopic inspection of the genitals. She felt pretty confident that it was T. tranquillus which occurs almost state wide. There is an additional species found in Missouri, but it traditionally has been restricted to the southern tip of Missouri. There is a slim chance it could be this southern species as population ranges do change year-to-year, but I feel pretty safe in saying that it is indeed T. tranquillus. 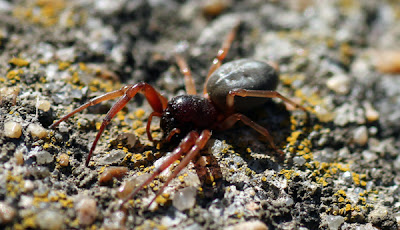