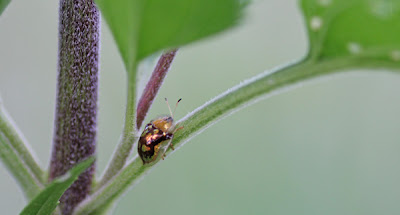 This brightly colored beetle is a Mottled Tortoise Beetle (Deloyala guttata), they occur throughout the United States and Canada. The term Tortoise comes from their ability to "hide" under their pronotum much like a turtle hides within its shell. When disturbed they will tuck themselves away or drop off the leaf they are on. When the danger passes they will once again show themselves and move around. The margins of the wings and pronotum are clear and the overall color of the beetle is various or mottled shades of brown, rust and gold. They are very shiny, almost metallic in appearance just like a gold coin. These tiny beetles are easily overlooked as they often hide on the underside of leaves, and they are less than 5mm in length which puts them on the tiny side. Generally when you find one, there will be additional beetles in the same area. They are fond of bindweed, morning glory and sweet potato. If these beetles occur in large enough numbers the damage may be severe. Both the adult and larval stages of these beetles feed extensively on the leaves of plants, and the damage may look life threatening to your plants, but is rarely bad enough to require intervention. If the plants are very young it could be damging to the point of killing the plants.
There may be two generations per year with the last adult generation overwintering under leaf litter. These are beautiful little beetles and extremely unqiue in their appearance. Well worth giving a second glance.
Posted by Shelly Cox at 7:07 PM