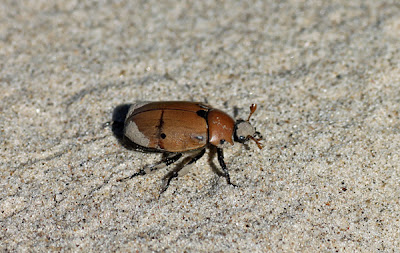 Grapevine beetles (Pelidnota punctata) are one of many "junebugs" that are found throughout Missouri. These beetles occur throughout the eastern portion of the United States. They are sometimes called the Spotted June Beetle because of the visible black spots on their elytra. Unlike many of the June beetles that call Missouri home that are drab brown, this beetle is reddish-golden in color and actually quite beautiful. The one pictured here to the right was found on a sandy beach along the Platte River, It had somehow flipped onto its back and could not right itself. I noticed it struggling in the sand and helped it back onto its legs. The little beetle was covered in wet sand that had hardened onto its head and wings. I tried scraping it off but it was adhered like concrete. I spent a few minutes photographing it before leaving it alone. 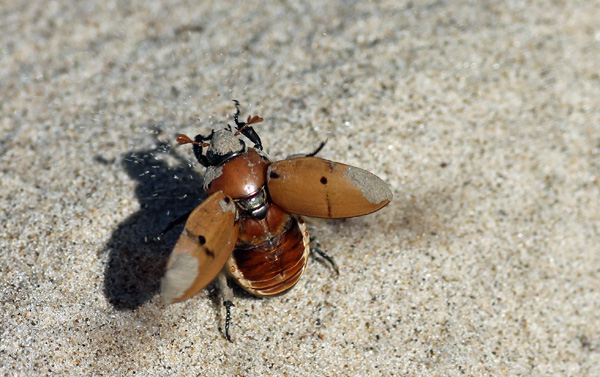 Unlike most Junebugs that feed on the roots of grasses and turf as grubs, this species feeds on the roots of trees. As adults they feed on the foliage and fruit of grapevines. In large numbers this feeding habit could damage grapevines and the fruit. Normally though you will only see a few beetles, so feeding damage is minimal. Females will lay their eggs on rotting stumps or decaying trees. When the eggs hatch the young grubs must burrow into the soil and find the root system they will feed on. Once they reach full size they will create a pupation chamber to finish their development. The pupal stage lasts all winter with the adult beetles emerging the following June. There is only one generation per year.