One of the most common spiders found throughout North America are the Funnel Web or Grass Spiders in the family Agelenidae. Each morning as I leave for work their webs are scattered throughout my yard like glistening crystal palaces. The sparkling of the dew covered webs is truly beautiful, and turns each web into a work of art. There are 600 known species Worldwide within this family and nearly 300 of them call North America home.

Update: A friend of mine from facebook and a spider expert sent me an email with the following correction. Thanks Mandy for pointing out my faux pas.

Hi, Shelly! Been a long time, I'm not as active on facebook and with keeping up with folks as I wish I was. i usually keep up with people behind the scenes... reading their pages and blogs, etc. I just read your cool blog post about funnel weavers. Loved it! ... but, I hope you don't hate me for it, I have a correction about the numbers presented... there's actually 1148 species in Agelenidae worldwide and only 116 of them live in North America (north of Mexico). It used to only be 90 but about 6 months ago, two genera from Amaurobiidae were transferred to Agelenidae, so that added 26 species, making the total 116 in North America now. The World Spider Catalog (http://research.amnh.org/iz/spiders/catalog/INTRO1.html) is updated every January and June and has all the up-to-date counts info on spiders and all the current taxonomy, as well. The "counts" tab will tell you how many genera and species in each family... and under the "families" tab, you can see the grand list of all species and which countries or areas they occur. It's pretty much THE source for spiders, so I would disregard any other sources that are telling you those numbers, to be honest (they're so far off that I'm curious who told you them, lol... unless it was just a really outdated book or something... but it'd have to be really, really outdated to come up with 600 & 300).

I believe the one pictured here is in the genus Agelenopsis possibly naevia spp. Without inspection of the genitalia it is next to impossible to identify them to species with any accuracy. Agelenopsis are the most frequently encountered of all the genera within North America. Their sheet-like web spreads out for nearly a foot (or more) in a circular fashion with a distinct funnel-like opening near the center. It is this opening that earned them the common name of funnel web spider. These spiders should not be confused with another spider that goes by a similar name and that is the Sydney Funnel Web Spider of Australia. The genus Agelenopsis belongs to the Araneomorph spiders which are true spiders or modern spiders, whereas the Sydney Funnel Web Spider belongs in a completely different family called Hexathelidae belonging to the Mygalomorph spiders which are the primitive spiders making them more closely related to tarantulas than to the species of funnel web spiders living in North America. The Sydney Funnel Web Spider has earned a nasty reputation as being one of the most deadly spiders in the world. You will not find these spiders in the United States! Another spider belonging within the family of Agelenidae is the Hobo Spider in the genus Tegenaria , they unfortunately have made their way into the United States via shipments of goods from Europe and now reside in portions of the Pacific Northwest. They are reported to be highly venomous and dangerous, but no real proof exists that this is so. 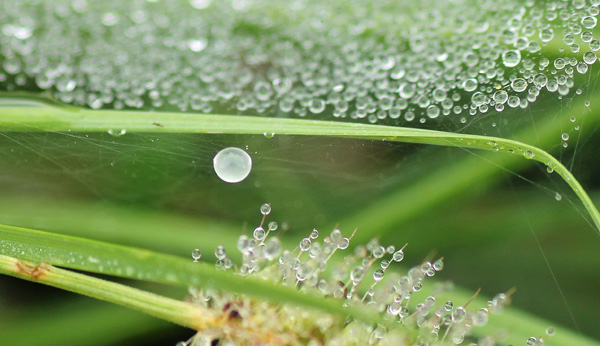 (Water droplet suspended from sheet web of funnel web spider)
Funnel Web Spiders are medium sized spiders with a legspan up to 1 1/2 inches. Their color varies from pale yellowish-tan with gray markings to reddish-brown with black markings. Their abdomen is gray to black along the margins with a light brown to brownish-red stripe bordered by lighter colored spots. They have very long legs that are banded at the joints. 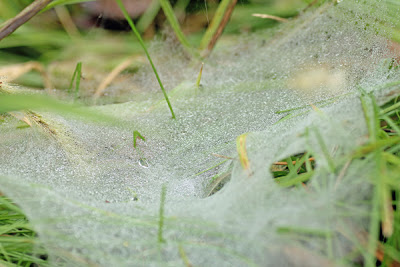 The females rarely leave their sheet-like web except to find a new location to build a web. They hide out inside the funnel laying in wait for an unsuspecting insect to crawl across the web. They will run rapidly out of their hiding place and envenomate their quarry. The webbing of this genus is not sticky like other spider webs, they instead rely on capturing their prey by using their extremely fast acting venom. Some species within this family will prey on other funnel web spiders. The funnel web spiders of some genus's actually do have sticky webbing and it is usually these particular species that become prey to the funnel web spiders without sticky webbing. The unsuspecting spider will crawl across the web, and instead of finding a web of the consistency that it is accustomed to walking on, it finds itself entangled in the sheeting of a totally different chemical makeup allowing the owner of said web to bite and drag the spider into her lair. 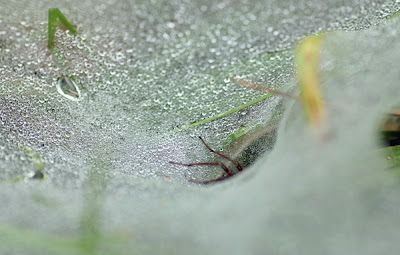 (Spidey legs peeking out of her hideout)
They become sexually mature in August at which time the males will begin looking for females. Males of this family of spiders are wanderers and are constantly on the look-out for food and for mates. When a male comes upon a female of his own species he will approach cautiously, after all he does not want to become her next meal. After determining the female is receptive of his attention he quickly dominates her and mates. By no means is he out of danger, he must make a hasty retreat before she changes her mind and decides he looks scrumptious. Males die shortly after mating, leaving the females to deposit an egg sac under the loose bark of a tree that she will guard until the first frost. Once the first frost comes the female will die often still clinging to the egg sac, making the ultimate sacrifice. Her life for the life of her offspring. Some species of funnel web spiders may live up to two years, but most only live one season. 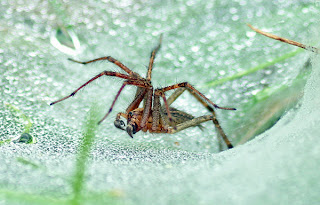