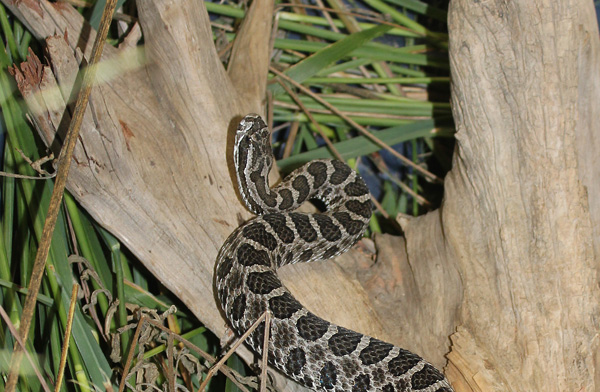 Here is another snake hovering on the brink of extinction in Missouri as well as throughout most of its range. The Western Massasauga (pronounced mass-a-saw'-ga) Rattlesnake is one of the smallest rattlesnakes found in Missouri wetlands and marshes. Because these lands are greatly reduced due primarily to agriculture, it is becoming increasingly more difficult for these snakes to carve out a niche for themselves. Squaw Creek NWR has a fairly healthy population of these snakes in large part because the land is federally owned and the snakes are protected there. Ongoing studies help to determine population density and over all health of the snakes. The one pictured here is a captive snake used as an educational animal to help promote the importance of all creatures within their given habitat. Snakes are especially important in rodent control and as a vital part of the food chain and should be left alone. They are also indicators of the health of their environment. 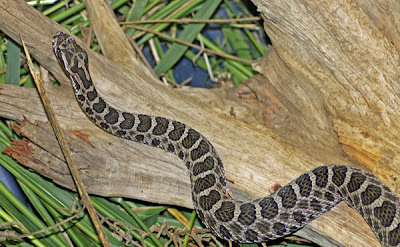 In the Chippewa language Massasauga translates into "great river mouth" which describes the lands where they are found. Like all Missouri venomous snakes they are "pit-vipers" , meaning they have an extra sensory organ in the form of pits located between the eyes and the nostrils. These pits are heat sensing organs that help them locate prey. They also have excellent eye sight and a great sense of smell. All of these senses combined make for a formidable predator. They commonly prey on mice, frogs, insects. Juveniles are fond of other serpents with Midland Brown Snakes making up the bulk of their diet. These snakes are also an important part of the food chain and sometimes fall victim to eagles, herons, raccoons, foxes, and hawks. Not to mention the occasional motorist who would rather kill snakes as to look at them. This near-sighted viewpoint of snakes is what has led to the near extinction of many species. Humans should try to exercise tolerance for these misunderstood creatures and recognize their importance in the over all health of a given habitat.

These are a slow moving snakes that rarely strike unless being provoked or handled. Their venom is less toxic than that of most venomous snakes, but should still be considered dangerous. If bitten; immediate medical attention should be sought.  During the spring they will be found in lowlands near marshes and wetlands. In the hotter summer months they are found in higher ground near grasslands, farmland and open fields. Like all snakes they are often found sunning themselves on rocks, and roadways. Massasauga rattlesnakes reach lengths up to thirty inches. Their ground color is gray or tan with numerous darker spots, there are even melanistic black varieties found occasionally.
Massasaugas are ovoviviparous (eggs develop in the body of the parent and hatch within or immediately after being expelled). The female produces large, yolk-filled eggs which are retained within her reproductive tract for a considerable period of development. The developing embryo receives no nourishment from the female, only from the yolk. Eggs of the Massasauga hatch inside the female and the young are born “alive.” A female snake that retains eggs in her body can bask in the sun, thus raising the temperature of the eggs and speeding their development, resulting in a variable gestation period of two to four months. The average litter size is 8 with anywhere from 3 to 12 being possible.

After birth, the young are on their own—no maternal care is known in snakes. As is the case for all cold-blooded vertebrates, the growth of the young is heavily dependent upon the amount of food available. 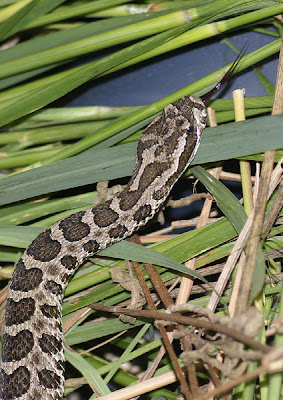