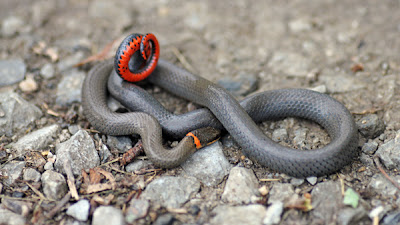 Prairie Ringneck (Disdophis punctatus arnyi) Snakes are one of the smallest (up to 14 inches) and most commonly found snakes in NW Missouri. One farm our family owns has them under almost every rock you turn over. They seem to vary in color depending upon region. They can be slate gray to brown with a ring color of yellow, orange or red. There is even a sub-species that lacks a ring around its neck entirely. These tiny, unassuming snakes are harmless, in fact their only defense is to flash the red underside of their tail. This is to distract a predator away from their head. 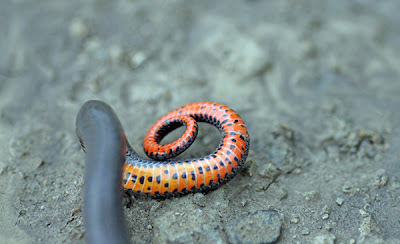 This snake rarely if ever tries to bite, and even if it did you wouldn't feel the bite at all......however it may startle you. Believe it or not though, this snake does have venom and could technically be classified as a venomous snake. However, the fangs they use to administer the venom are located at the back of their mouth and are not likely to ever come in contact with our skin. The venom seems to be a strategy for subduing prey, rather than a defense mechanism. They use a combination of constriction and envenomation to capture and kill prey. They typically feed on tiny salamanders, frogs, earthworms, and even small snakes. The venom poses no threat to humans.

These snakes are secretive and nocturnal. You are unlikely to see one out during the day without actually looking for them under logs, rocks, or other things they can hide under. These snakes are somewhat social and occasionally  will be found in large aggregations of up to 100 snakes. I commonly see as many 4 or 5 together under one rock.

Females are generally larger than males and they reach sexual maturity at the age of 4 or 5. Mating usually takes place in the spring when the female will release a pheromone from her skin that attracts nearby males. The male will rub the female with his closed mouth, and move in such a way as to line up their bodies, he then bites the female around the neck to anchor her.  After mating, the female will lay up to 10 eggs; the young hatch sometime during August or September. Although occasionally mating takes place in the fall, and the female will delay fertilization until the following spring. When the young hatch they are approximately 3 to 4 inches long and will be completely on their own to fend for themselves. These snakes live approximately 10 years in the wild, but are capable of living up to 20 years in the wild. They are becoming increasingly popular in the pet trade because of their mild nature and beautiful coloration although, in my opinion they do not do well in captivity, and may only live up to 5 years. Because of their secretive nature, they are not very exciting animals to keep anyway. They will bury themselves in the containers substrate or hide out under stones or any other hide you provide for them and only come out during feeding time.

Very little is actually known about this snake, and much research still needs to be done to fully understand their lifecyle. I smell a research project! 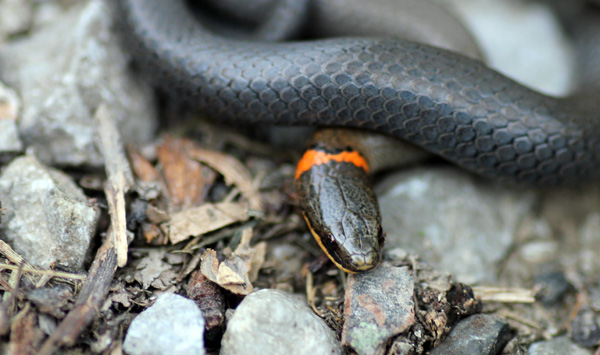