Dung Beetles to the Rescue

Lately I've been having a melt down over the fact that my kids think they live in a barn! They are not toddlers anymore, quite the contrary they are officially adults.....and their rooms look like a tornado hit the house, they leave doors open while the air is running, and leave stuff laying all over the house. Now, I realize I am not the first mom to cry out at the injustice of playing maid to ungrateful teenagers and young adults, but seriously even I have my breaking point. Saturday night was just such a moment......after discovering mess after mess and no kids in sight I got on the phone tracked them down and let them have it!

I am sure you are all wondering what in the heck does this have to do with bugs! Well a lot actually...because apparently I am far too easy to figure out.

It was exactly 12:30am when my son came in the back door....woke me up and announced he had a dung beetle for me! This got me right out of bed......I threw on my robe and nearly flew into the kitchen to see what he had found. After exclaiming what a great find he had and thanking him...it suddenly dawned on me. I'd just been played! I looked at him and asked "so you think this is getting you out of trouble for your messy room?" His girlfriend was there and began laughing so hard I thought she was going to cry.....and then said to me "THAT'S EXACTLY WHAT HE SAID TO ME!" "Mom won't be able to stay mad when I give her this" He even informed me that he faced humiliation at the hands of his friends when he captured it. One of his friends was even overheard exclaiming "Who's mom wants a Sh*t beetle!?" He braved the teasing and off-color remarks from his friends to get himself out of the doghouse....so how could I not forgive him?
I had to admit the entire situation and retelling of it was funny...so I had no choice but to let him off the hook. The next morning he woke up and cleaned his room and all was in harmony once again.

Am I that transparent? Am I that Ga-ga over bugs? Am I that easy? Or do my kids love me that much and feel that sorry for upsetting me? I think I prefer to believe the last one.

The beetle that saved my son from finding a new residence is a magnificently large black dung beetle that I believe is Dichotomius carolinus in the family scarabaeidae. In the not so distant past these beetles were becoming very difficult to find. I am not sure if it was loss of appropriate food sources, or the use of pesticides in the areas where they occurred. A few years ago their numbers began rebounding much to the relief of cattle farmers around the area. 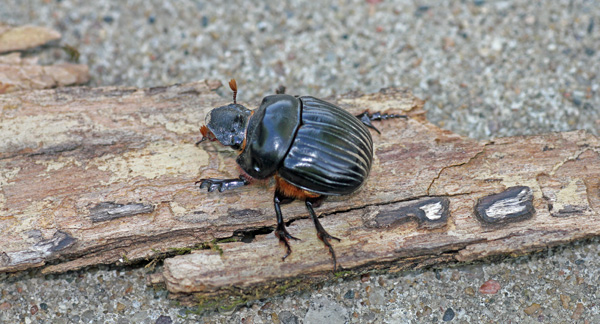 This beetle is approximately 1 1/4 long with a very thick-bodied appearance. Males have a short, blunt horn on their head. The one pictured here is a male. They have deeply grooved elytra that are often filled with dirt.....or is it poo? These beetles are active from spring to fall and found where large mammals such as cattle or horses occur. They roll little balls of dung and bury them in place. They do not roll their dung balls away to other locations like some species of dung beetles do. These beetles are very beneficial to the environment. They aerate the soil, compete for underground nesting sites with several different flies, and their habits add nutrients  back to the soil which helps prevent pasture fouling. After burying the dung the female will lay eggs on the ball and the resulting larvae will feed on the dung ball. Adult beetles also feed on dung. This constant moving and feeding on dung is excellent for fertilizing the soil and increasing the nutrient content of soil. Consequently pasture grasses will yield better stands and provide more fodder for cattle and horses, thus reducing the amount of hay that needs to be purchased to supplement their diet.


My son would argue that they are also excellent at saving his skin from the wrath of Mom! 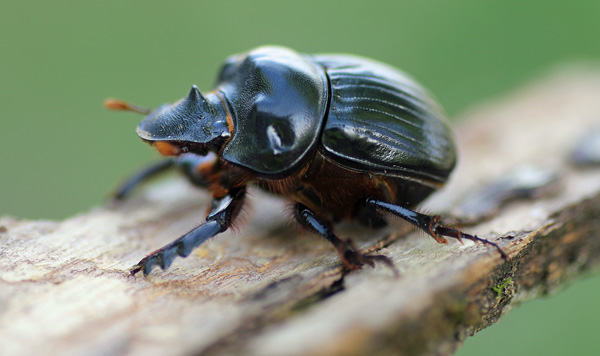