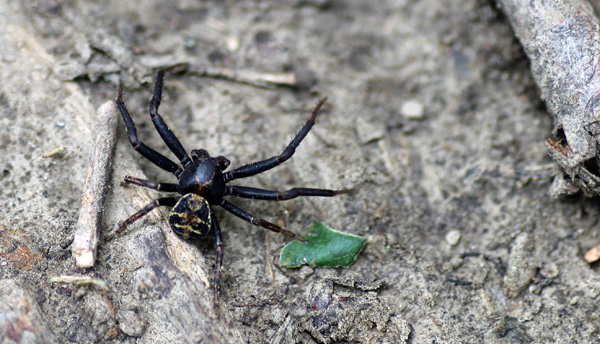 Crab Spiders in the genus Xysticus are the Ground Crab Spiders. As their common name suggests they are found crawling around on the ground usually under leaf litter, near rocks, or possibly low on vegetation. They are generally larger than the flower crab spiders and more cryptically colored. They vary from gray to brown usually, but there are decidedly black specimens like the one pictured here. While hiking at Sunbridge Hills with my boss, he noticed this crawling on the path in front of him. I suspected it was a crab spider, but did not know for sure which one as I'd never seen one before. Like all crab spiders, this specimen also has extended front legs giving it a crab-like appearance. They are very difficult to identify to species as most look similar and without close inspection of the palps an accurate ID just cannot be obtained.

This particular spider was very fast moving and difficult to photograph, all it wanted to do was hide away from our prying eyes. I managed a few shots before letting it go about its business. The bulk of the diet of these ground spiders is moths and butterflies, and the occasional beetle or other small arthropod. They do not build webs to capture prey, instead they rely on stealth and stalking to subdue their dinner.
Posted by Shelly Cox at 6:35 PM