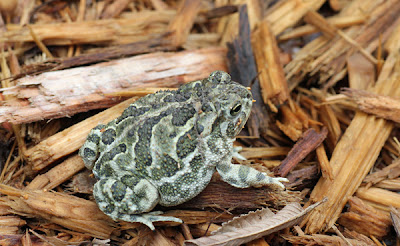 This adorable little amphibian is a Great Plains Toad (Bufo cognatus), they are native to Missouri but only occur in portions of the Missouri River flood plain. While Joey and I were hiking at Sunbridge Hills Conservation Area in the Bluffs of the Missouri River just on the outskirts of St. Joseph last night I found this toad hopping around in some tall grasses. I could tell right away that his coloring and markings were different than the toads I see at home. I captured him and brought him home for a positive ID. Imagine my surprise to learn I'd found a toad that is only found in a scant few counties in Missouri. These are a medium sized species measuring up to 4 inches with the state record being 4 inches. This one measures just under 2 inches. Their coloring is highly variable and can be gray, brown, dark green, green or yellow. This one was a muted olive green color with some gray areas. Males are smaller than females, and I suspect this is a female. In Missouri this particular species has not been studied so little is known about its natural history. In other states of occurrence it is known to favor mixed grasslands and short grass prairies. It is reported to avoid forested areas, which might be refuted in Missouri as this one was definitely caught in a grassy knoll next to a forested area. Since the known habitat preference in Missouri is the Missouri River flood plain, and there are huge stands of forested areas all along the flood plain, perhaps in Missouri its habitat preference varies compared to other parts of its range. 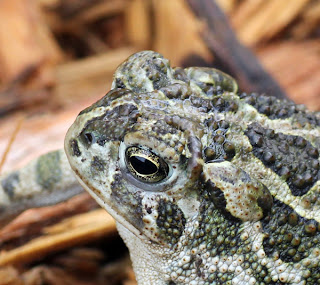 The hopping pattern of this toad is completely different from the more common Eastern American Toad, it is much faster with longer leaps. It took quite an effort to capture this one. There is nothing awkward or slow about this species. They seem to be a little more nervous around people and prone to flee quickly..

They are excellent at burrowing into the ground and frequently do so during dry or cold spells, which in Missouri can be a large portion of the year. With the impending flood of the Missouri River many animals are being pushed to higher ground and that may be the case with this particular specimen as it was found in the bluffs of the Missouri River. In St. Joseph the Missouri River flood stage is 17 feet and we are currently at 23 feet and rising. Up north in Minnesota because of excessive rainfall their reservoir is full and they are being forced to release water, which is causing catastrophic flooding of farm ground, and low lying areas south of the dam. It is guesstimated to reach 33 feet in St. Joseph before it is over, which is a full foot higher than the record breaking flood of 1993 where 1,000's of people were displaced from their homes and billions of dollars in damages occurred, not to mention the injuries and loss to life.

The great plains toad breeds in late spring or early summer when the males begin calling. Their call has been described as sounding very much like an explosive jackhammer-like metallic trill that is deafening when heard up close. These toad breed right after heavy rainfall, which could explain why I found her out in the open, the night before we had a huge rainfall, and it probably put her in the mood for love. Females can lay large amounts of eggs, in fact specimens in Oklahoma were found to lay as many as 45,000 eggs. Males stay near the female to capture the eggs between his legs in a "basket" of sorts. Presumably this is to make sure his sperm is the one who fertilized the eggs. The eggs are then laid in long strands in shallow bodies of water. Many females may chose the same watering hole for egg laying. It takes a week for the eggs to hatch and up to a month for them to reach adult size.

The main enemy of this toad is the plains garter snake. Garter snakes are noted for eating toads and frogs. I even managed to capture a picture a few years ago of a garter snakes trying to eat an Eastern American Toad in my backyard(pictured below). These snakes hang around our goldfish pond waiting for an opportunity to capture and eat the frogs and toads. 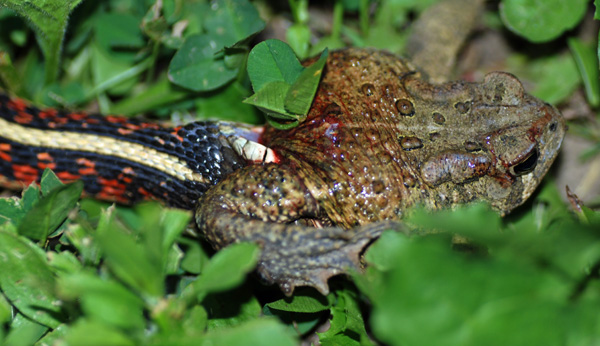 Getting outside and exploring is sure to bring with it many cool discoveries. This toad was one of many great finds of our evening yesterday and I will be posting more cool creatures this week from just this one 2 hour outing. Stay tuned. 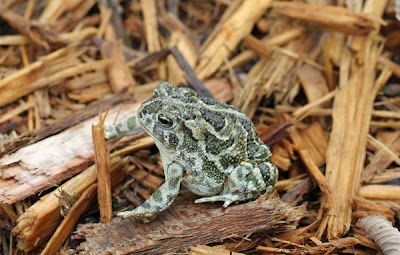