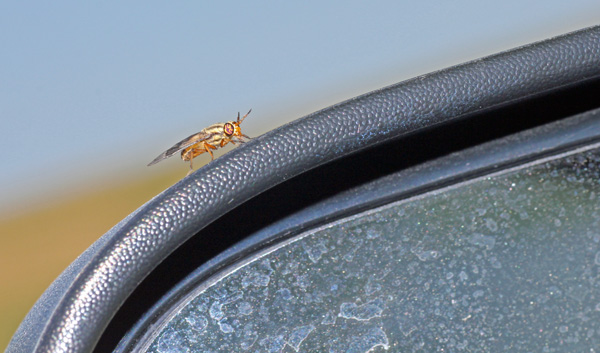 Few insects cause as much dread as the Deer Fly (Genus--Chrysops), these biting flies can bring a grown man to his knees, or at least send him running out of the infested area. Like many biting or stinging insects, it is only the female who nibbles on us for a blood meal. She needs the blood of warm-blooded mammals in order to produce eggs. She prefers to use deer, horses, cattle and other mammals, but humans will suffice in a pinch. These flies belong to the same family of flies as the Horse Fly, Tabanidae. The bite of a deer fly is painful, at least that is what Joey says. We have one farm in Fillmore, MO that is home to a sizable population of these flies. Each time he gets out of his pickup they begin biting him, almost has if he had a big target painted on him that they home in on and collectively come after him. I on the other hand can be right there next to him and they do not bother me....curious!

They are reported to favor damp areas, which makes perfect since as the ones on our farm are located near a woodland stream and a low lying area that always hold water. The female lays her eggs on plants near the shore line of the water, when they hatch they drop into the water and remain there until they are ready to pupate. They will crawl out of the water and burrow into the mud to form a pupation chamber and emerge later as the adult.

Deer flies have scissor-like mouth parts that they use to lacerate the skin of animals and humans alike. This cut causes blood to flow and the flies will lap it up with their sponge-like mouthparts. Males on the other hand, while having similar mouthparts cannot bite humans or other animals and instead feed on pollen or nectar. Because of their feeding habits these flies have the potential to spread diseases to humans. They have been studied extensively and shown to carry several bacteria, and disease causing agents in their digestive tract and on their mouthparts. Currently, however, there is no substantiated proof that they do indeed transmit these bacteria to humans, just be aware the potential is still there. There is a western species of deer fly that has been shown to spread tuleremia to humans. Tuleremia is commonly spread to humans through horses or rabbits and that is still the most likely culprit in the transmission.
Some people are hyper-sensitive to the saliva of these flies and can develop rashes, fever and other disabilities. Reactions increase the more a person is bitten and exposed to these flies and their biting.

There are over 110 species of deer fly in the United States, but they are not known to occur in Hawaii. Florida has numerous species because of the flies favorable habitat....lots of standing water.
They are easily recognized by their black veined wings and their eyes which are brightly colored with zig-zag stripes. They are actually beautiful little flies, just too bad they have such bad attitudes!
.
Control measures for this fly are almost non-existent. Bug sprays containing DEET, may be of some help if you are going to be in an area where they occur. Using chemicals in their breeding grounds is not feasible, because of the damage that can occur to other aquatic life forms. Draining wetlands and marshes, while possible is expensive and probably not a good idea as it could displace other wildlife. Fortunately, these flies are only around for a short period of time in the summer from June through July. 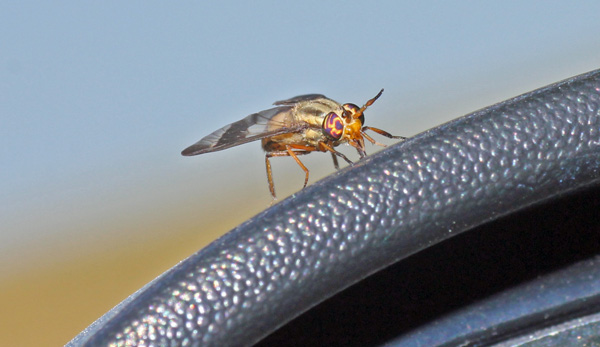