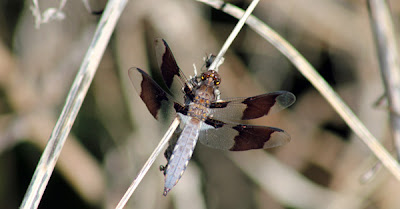 The common whitetail (Libellula lydia) comes by its name honestly, because it is without a doubt one of the most common of all dragonflies found throughout its range. This species if found throughout all of the United States with exception to the desert southwest where it is replaced by the Desert Whitetail. The males are unmistakable with their powdery blue abdomen and dark brown wing blotches. Females are much duller in appearance and will be all brown with two yellowish colored dotted lines running down the abdomen. The females have a different wing pattern as well. Males are highly territorial and will defend roughly 30 to 60 feet of shoreline from other dragonflies. The males use their powdery blue colored body to ward off potential rivals. 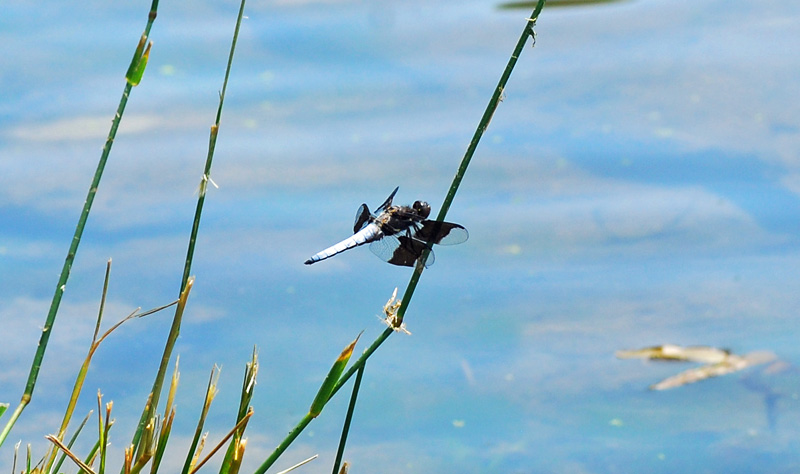 Common whitetails are perching dragonflies and will often be found on low growing vegetation near a pond or other body of water. They can sometimes be found perching on the ground as well. Like all dragonflies they consume other insects by darting out quickly and capturing the insects with their legs. They will often eat their meal while on the wing, but occasionally will land on a nearby surface to eat their prey. This gives a whole new meaning to the term "fast food." 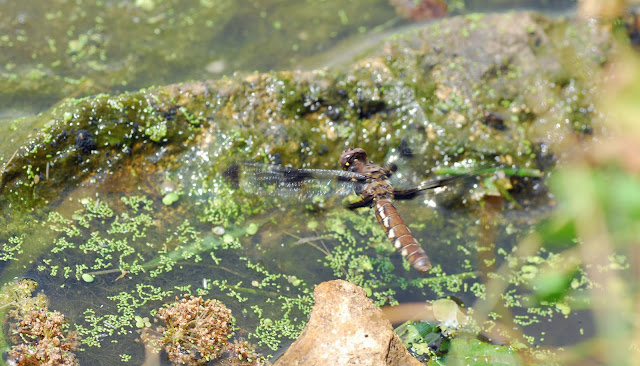 (Female ovipositing)
After mating, the males will stand guard over the females as they deposit their eggs in the water. The female uses her ovipositor located at the very tip of her abdomen to "tap" the surface of the water which releases eggs. The eggs will drop into the water and be all but invisible on the bottom sediment. Once the eggs hatch the tiny nymphs will begin seeking prey in the form of small aquatic insects. It will take them up to a year to complete their lifecycle and become adults. The nymphs do their part to keep other aquatic insects under control, but they aren't without their own enemies. Larger aquatic arthropods, frogs, small turtles and fish will also consume these nymphs. They are therefore an important part of the food chain.
Posted by Shelly Cox at 12:39 PM