This sounds like something out of a Dean Koontz novel, or perhaps something you would see in classic horror flick from the 1960s. Since the insects have not appeared on the home front as of yet I decided to search the web for interesting bug related articles and share them with everyone.....at least until I can get out and get some interesting photos of my own.

ScienceDaily (Mar. 3, 2011) — Four new Brazilian species in the genus Ophiocordyceps have been published in the online journal PLoS ONE. The fungi, named by Dr. Harry Evans and Dr. David Hughes, belong to a group of "zombifying" fungi that infect ants and then manipulate their behavior, eventually killing the ants after securing a prime location for spore dispersal.
These results appear in a paper by Evans et al. entitled Hidden Diversity Behind the Zombie-Ant Fungus Ophiocordyceps unilateralis: Four New Species Described from Carpenter Ants in Minas Gerais, Brazil. This paper is the first to validly publish new fungal names in an online-only journal while still complying with the rules and recommendations of the International Code of Botanical Nomenclature (ICBN).

Beyond this important milestone, the paper is noteworthy for the attention it draws to undiscovered, complex, biological interactions in threatened habitats. The four new species all come from the Atlantic Rainforest of Brazil which is the most heavily degraded biodiversity hotspot on the planet. Ninety-two percent of its original coverage is gone. 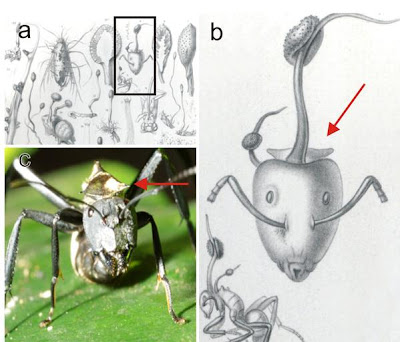 a) Original plate from the 1865 Selecta Fungorum Carpologia of the Tulasne brothers [4], illustrating the holotype of Ophiocordyceps (Torrubia) unilateralis and said to be on the leaf-cutting ant, Atta cephalotes; b) Detail from plate showing the distinctive pronotal plate of Camponotus sericeiventris, as well as a side view of the host which is clearly a carpenter ant and not a leaf-cutter; compare with c) Live worker of C. sericeiventris showing the spines on the pronotal plate (arrow). (Credit: Harry C. Evans et al. PLoS ONE, DOI: 10.1371/journal.pone.0017024)
The effect of biodiversity loss on community structure is well known. What researchers don't know is how parasites, such as these zombie-inducing fungi, cope with fragmentation. Here the authors show that each of the four species is highly specialized on one ant species and has a suite of adaptations and spore types to ensure infection. The life-cycle of these fungi that infect, manipulate and kill ants before growing spore producing stalks from their heads is remarkably complicated. The present work establishes the identification tools to move forward and ask how forest fragmentation affects such disease dynamics.


The above story is reprinted (with editorial adaptations by ScienceDaily staff) from materials provided by Public Library of Science, via EurekAlert!, a service of AAAS.