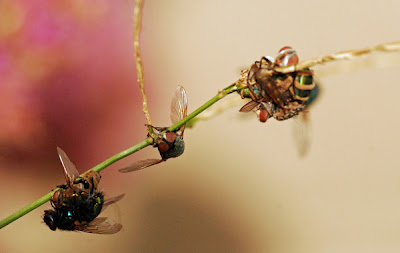 While visiting my mom and grandmas house the other day I walked around their yard looking at the flowers and discovered these flies stuck to a blade of grass. Further investigation lead to more dead flies being discovered in similar frozen animation. I was perplexed by what could have possibly happened to these flies. Something awful it would appear, to have cut their life so short and in such a morbid way. I took a few pictures and put them on my facebook page seeking help from my fellow insect lovers, would anyone know what happened? It wasn't long and James Trager from over at Beetles in the Bush knew exactly what happened to these unfortunate flies. It was a fungus in the genus Entomopthora, which translates into "Insect Destroyer" this particular fungus is sp. muscae which means "of the fly" When putting it all together Entomopthora muscae literally means Destroyer of the Fly.

The fungus makes its way into the fly via the digestive track, or possibly through any small opening in the exoskeleton of the fly. The fungus has one purpose, and that is to reproduce. It does this by rapidly moving through the flies system going directly to the brain. Once in the brain it will control the area that governs movement. The fungus basically takes over control of the fly and makes it crawl where ever it wants the fly to crawl. In the case of this fungus it wants to reach a high vantage point. So like a puppet on a string the fly will make its way to the tip of a leaf, blade of grass, plant or any other surface it happens to be on. This vantage point....or "Summit" is where this particular fungal disease got its common name of Summits Disease. By making the fly crawl to a higher point, it gives the fungus the best possible chance that its spores will be carried by the wind once released by the fly. After the fungus has fully controlled the brain of the fly it will then concentrate on infiltrating other areas of the fly and eventually will consume all of the flies internal organs, thus killing the fly. All that will remain is the macabre, skeletal husk of what was once a vibrant, if annoying fly.This fungal spore spreads rapidly and can affect up to 80% of fly populations in a given area. From the looks of my mothers backyard I would say it is well on its way to accomplishing that. 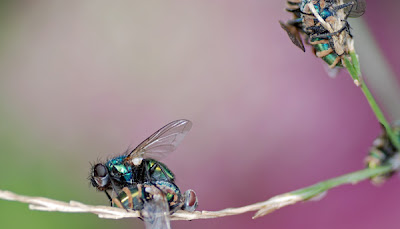 This fungus was first described in 1855 by an individual named Cohn. he identified it as a epizootic of house flies. Entomopthora can infect numerous species of flies in a wide array of families. It would seem that Mother Nature provided a perfect method of controlling the overpopulation of flies. Could man capitalize on this? Can we make a biological agent capable of destroying disease carrying flies? Can humans copy what Mother Nature has given? There is much research and work being done to accomplish this feat. It seems this fungus is very short lived and highly sensitive making it very hard to replicate. With enough research and hard work I've no doubt a successful biological fly control that can be used broad spectrum in areas that are highly infested with flies will be designed. This notion is so much better than chemicals created in labs that have no preference as to the species it kills. Hate flies, but love butterflies? What better way to get rid of one and not harm the other than to manufacture a fungus designed to kill only your target?
Posted by Shelly Cox at 12:03 PM