My husband and I took a short weekend vacation to Harry S. Truman State Park in Warsaw Missouri this past weekend. We arrived and sat up our campsite on Friday and then decided to take a hike on one of two walking trails located at the park. This particular trail is called the Wallflower trail and runs through a rocky glade overlooking Truman Lake. It is a nice walk, if a bit treacherous with all the loose rocks and small boulders to step over. I immediately started turning over stones to see what would be underneath and it wasn't long before I found a Scorpion.

Missouri is home to one native scorpion and that is the Striped Bark Scorpion (Centruroides vittatus). These are small scorpions that measure up to 1 3/4 inches. They are golden yellow or tan, some specimens may be almost white. There is a distinctive triangular marking on the head and two broad stripes down the back.

After locating this particular individual I realized I did not have a container to put it in. I was reluctant to carry it around in my hand while we finished the hike, so my husband came up with a suggestion. We had a copy of the trail map with us, he said roll it into a tube and clamp down the ends. It worked like a charm for a makeshift container. I took it back to our campsite and showed the children in the next campsite over from ours. They thought she/he was pretty cool, and I had to agree. This scorpion is now at home in my office at MDC. It will make a great exhibit specimen to show visitors who might not realize we even have scorpions living in Missouri.

Scorpions are often associated with warm, arid regions like the deserts of Arizona, Texas and New Mexico. Missouri has a more temperate climate and therefore not usually thought of as a home for a creature like this. I think that is what makes it even more remarkable. 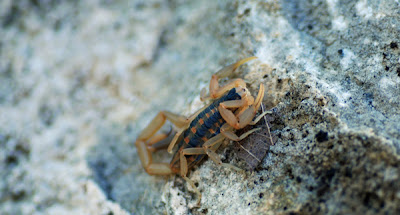 Most scorpions in Missouri are located in the Central to Southern regions of the state. Although there are a few isolated populations found in some Northern counties. These are secretive creatures that hide out during the day under rocks or in crevices protected from the heat of the day and prying eyes of would-be predators. They are active at night and hunt for various insect prey to feed on. Creatures like raccoons, armadillos, opossums and lizards all feed on scorpions. So being secretive and shy helps them survive. They will sometimes end up in homes and are often found in basements, cellars and garages. Many people want to know if they are dangerous, sure, they can be. The sting is extremely painful, and the venom contains a mild neurotoxin that can cause a severe reaction in individuals who are sensitive to the venom. This would be people who are allergic to bee venom. People with these kinds of reactions may require hospital care, hence my hesitation in carrying it.

Mating occurs in the fall, spring or sometimes early summer. After engaging in an elaborate courtship ritual the male will deposit a sperm sac on the ground. He will then drag the female over this sac, at which point her body will take the sperm sac with a special organ located on her abdomen. The young will develop inside the female with a placental connection, and after approximately 8 weeks the young will be born. She may have up to 50 young at a time. These newly emerged offspring will ride around on their mothers back until their first molt, at which time they will desperse to live independent lives.

A cool feature about these and all scorpions is their ability to "glow" under iridescent light, such as a black light. This makes them easy to spot at night.

I found many interesting creatures during our weekend stay, and I will try to post a new one daily.
Posted by Shelly Cox at 2:02 PM