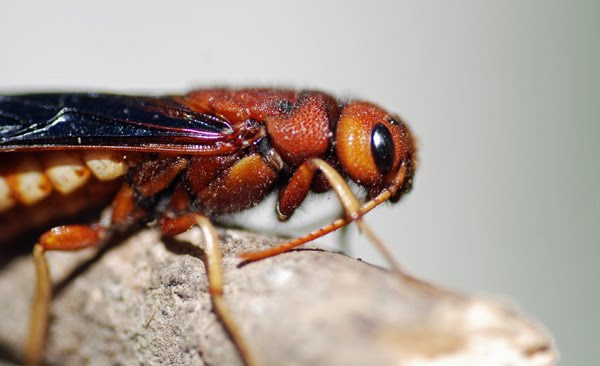 This bug eyed creature is a Pigeon Horntail (Tremex columbia). They are found throughout North America. The one pictured here was photographed in St. Joseph, MO. We were at my husband's uncles place cleaning out sheds when this very large wasp-like insect began hovering around my leg. It was about ready to land on my leg so I could finally identify what it was when my brother-in-law took his hat off and swatted it. He knocked the poor think loopy and it hit the ground dazed! Fortunately he didn't kill, it was only stunned. I was able to pick it up and was thrilled to discover that it was one of the most beautiful specimens of this species I had ever seen. I captured several images of it and decided to add it to my insect collection.

This particular one was very large at approximately 2 inches in length. This one is a female, which is evident from the stinger-like projection at the end of her abdomen. This projection is called an ovipositor and it is used to drill into decaying timber and to deposit eggs. The female typically chooses Silver Maple, Cottonwood, Ash and Elm more often than other varities of trees. The young larvae will bore into the wood and feed on the wood pulp. It will take the larva several years to reach full size, at which time they will pupate and emerge as adults a few weeks later. The adults feed on nectar, and are often seen hovering about flowers in gardens. Especially if these gardens are near a stand of timberland.

As adults they can vary a lot in coloration, and may be blue, black or even brown. The legs will have yellow coloration on them.This one was predominantly yellow and orangish-red. Males are smaller than females and usually only measure up to one inch.

This species is often parasitized by the Giant Ichneumon Wasp. The females of these large wasp-like creatures will investigate a decayed piece of wood, and if she senses that there is a horntail larvae burrowing within, she will take her extra long ovipositor and drill into the wood and deposit an egg on the horntail larvae. It seems an impossible feat for her to be able to detect that worm-like creature tunneling underneath the bark without being able to see it. Her egg will hatch and the young larvae will burrow into the body of the horntail larvae. It will feed until it is ready to pupate. This ultimately kills the horntail larvae. 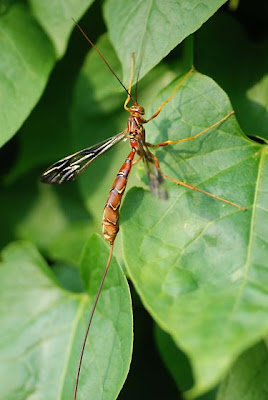 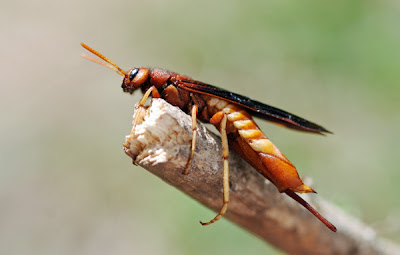 The Pigeon Horntail is often called the Wood Wasp, for obvious reasons, they not only look likes wasps, but they are associated with woodlands. They are harmless to humans, and will not sting. The projection at the end of the abdomen is hard and sharp, but she will not burrow it into your skin. These are interesting insects to have around and if you are lucky enough to find one ovipositing into a tree trunk I'm sure it would be a sight you wouldn't soon forget.
Posted by Shelly Cox at 12:16 PM