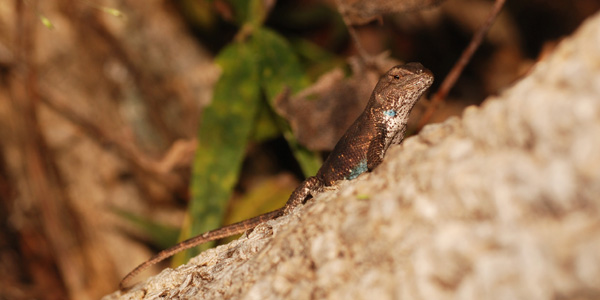 Once again I am posting something other than an arthropod, but I just can't help it. I am as fascinated by reptiles and amphibians as I am insects and spiders. These little Fence Lizards are so charming and cute, yes I said cute. Just look at that face! I found this one scurrying among the leaf litter at Truman State Park. Once it knew it had been found by prying eyes (mine).....it was quick to run away. It darted up a tree and froze there, seeming to think if he didn't move I couldn't see him. I let him think his ruse worked and began snapping pictures. I was exceedingly surprised that he sat still for so long. Normally they are constant motion and run away very quickly when they sense danger. Maybe he knew I meant him no harm....okay probably not, but I can think it.

Northern Fence Lizards(Sceloporus undulatus hyacinthinus) are very common throughout Central, Southern and Eastern Missouri. They appear to be absent from NW Missouri where I live. Therefore I felt very fortunate to have seen this one and be able to photograph it. They may reach lengths of up to 7 inches from tip of tail to tip of nose. So they aren't large lizards by any means. What they lack in size they  make up for in coloring.....especially the males. They will have iridscent blue markings on their belly and throat outlined in black. Their over all color is either tan, gray, brown or reddish-brown. Females have a deeply patterned back, whereas the males have little to no pattern. The females may possess some  light blue coloring along their sides.

Like all reptiles they are cold-blooded and will be found basking on rocks, logs or any other available surface. During the hottest part of summer they will bask and hunt for food early in the day, and typically rest in cooler shaded areas in the afternoon. They will become active again late in the day or towards evening when it is cooler. Fence lizards are associated with timbered edges, rocky glades and open fields. Look for them hiding among the wood piles, in tree stumps, within downed trees, and in rock piles.

Mating takes place from early spring to late summer. Females will produce two egg clutches. Males bob their head at females while performing pushups...apparently this showmanship earns him the favors of a female. It reminds me of the musclebound men on the beach flexing for the females. Are we females really that gullilble? I guess so. Once mated the female will look for an area with loose dirt and dig a suitable hole to lay her eggs in. All eggs will hatch sometime in August. Second year females produce more eggs than first year females, and few lizards live beyond their 3rd year.

We found several fence lizards while walking the trail along the glades. They would dart about among the trees, running just out of sight. Not one other lizard cooperated the way this one did, and allowed me to take pictures. Perhaps it is vanity?
Posted by Shelly Cox at 11:11 AM