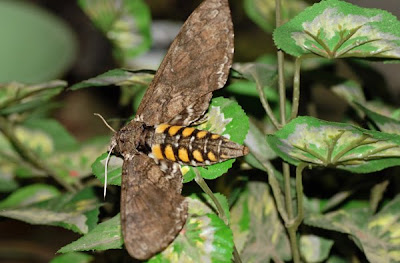 This pretty orange-spotted moth is the Carolina Sphinx Moth (Manduca sexta). They are sometimes called the "Six-spotted Hawk Moth" because of the orangish-yellow spots on their abdomen. These moths have  distinct black, brown and white markings on their wings. The hindwings are black and white with two zig-zag median lines.

These are large moths with a wingspan up to 4 3/4 inches, and are often found nectaring at dusk at various flowers. Because of their size and their flight pattern they resemble hummingbirds and are often mistaken for them. 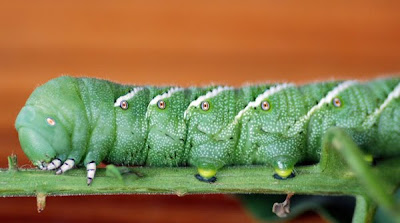 The caterpillars are called Tobacoo Hornworms. They are large and can consume large amounts of foliage as well as fruit in a short period of time. If these caterpillars end up on your tomatoes you won't have much left unless you remove them. They are a beautiful green with yellow stripes and a red-tipped tail at the end of the abdomen. Fully grown caterpillars will be approximately 3 to 3 1/2 inches long. They will drop to the ground and pupate in the soil. They will spend the winter in this stage and emerge the following spring.  There are several host plants for this species, such as tobacco, potato, tomato and other plants in the nightshade family. 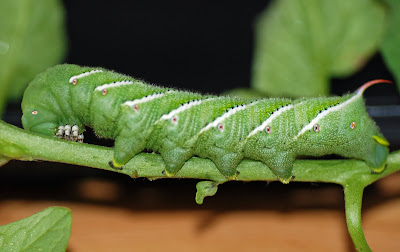