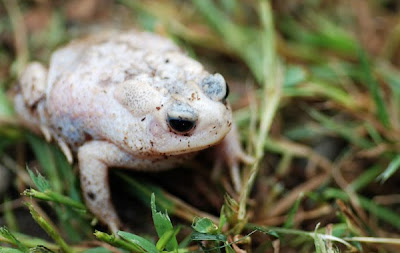 I realize this little toad is in no way an insect, but I figure since he feeds on insects he would qualify for being included on this blog, he is all white,  plus he is just plain cool....did I mention he is WHITE? I received a phone call from a man living in Missouri City, MO who said he had found an albino toad and wondered if we would like to have him. He sent me some photos and after looking at them I assured him I would love to have the toad for an exhibit animal at my office. My supervisor lives near this guy so he said he would pick it up for me. Now we have this beautiful little white toad in our office.

He is not a true albino, he has instead a Leusistic abnormality. Meaning he has the inability to produce pigment cells. Some animals with this defect will have patches of white where the cells are abnormal, resulting in a pie-bald appearance. This little toad is completely white, so his entire surface area lacks normal pigment cells. He has black eyes, rather than pink which indicates he is not a true albino. 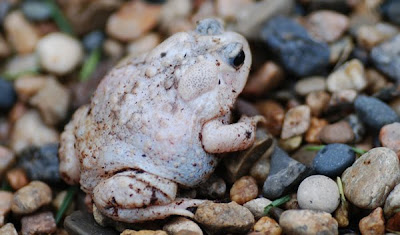 We've had him about 3 weeks, and he has almost doubled his size. He eats like a little piglet, consuming 6 or more crickets each day. I just think he is the cutest little guy in the amphibian world right now.

Just thought I would share such a unique creature with all of you readers. It just goes to show you never know what will show up once you venture outside.
Posted by Shelly Cox at 4:16 PM