This crazy looking stick-like insect is NOT a Stick Insect. It is in fact a Water Scorpion in the family Nepidae. They are in the same order as other true bugs, Hemiptera. They are very long and thin just as this picture shows. Their front two front legs are used to grab insect prey and pull it back into their mouth to feed. They will eat tadpoles, tiny fish like minnows or offspring of other fish (in captivity they do well on young guppies), they will also feed on other aquatic insects. Their mouth is much like another group of insects within this order called the assassin bugs. It is a beak-like structure that pierces the outer skeleton of their prey, then they inject them with an enzyme which sedates their prey as well as liquefying the insides of the unfortunate victim. The water scorpion can then slurp up the insides like a n insect slurpee.


The long "tails" that protrude from the backside of the scorpion are actually breathing tubes. They typically float on debris or plants near the waters surface where they will extend their breathing tubes out of the water. They can swim, but seldom do unless disturbed.  They will overwinter as adults and lay eggs the following spring. The female will lay her eggs in vegetation near the shore line or on the surface of the water. In about 2 to 4 weeks the eggs hatch and the young begin feeding on tiny insect prey. It takes them about 2 months to reach maturity. It is not uncommon to see one of these crazy looking insect reach lengths up to 5 or 6 inches. These crazy bugs possess wings and will fly. 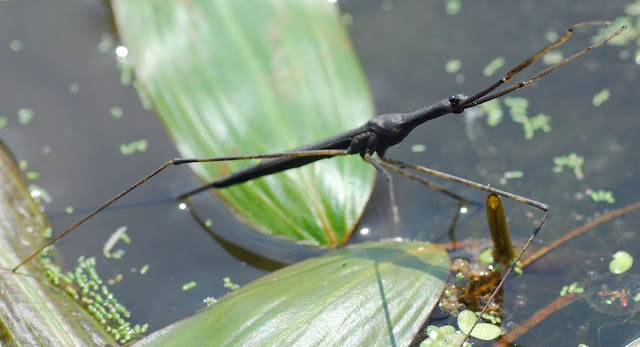 The one pictured here was captured by a little girl during a field trip to my office. We were hosting a local preschool for a field trip to the pond. We divided the group into two separate groups. One half of the group fished, while the other half mucked around in the pond for aquatic insects. Then we switched the groups. One of the girls in the first group pulled her net into shore and screamed that she caught a water spider. I went to investigate and discovered that she had caught this water scorpion. It was only the second one I've ever seen and certainly the biggest at approximately 3 1/2 inches in length. I made a big deal out of her capture and told her what a special insect she caught. She was thrilled. After the group left I kept the scorpion and placed it in a tank. I've been feeding it freeze dried crickets. Hopefully it will survive.
Posted by Shelly Cox at 6:21 PM