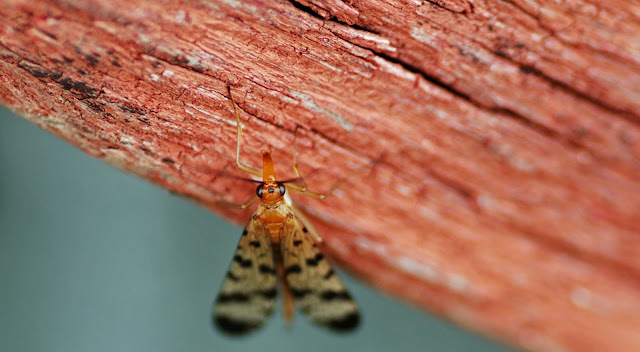 Scorpionfly's belong in the order Mecoptera, and this particular specimen is in the genus Panorpa.They get their name from the males odd upward-turned segment at the tip of their abdomen. This bulbous feature resembles the stinger on a scorpion, so hence the name Scorpionfly. They cannot sting, and are completely harmless to people. I believe these pictures are of a female, which lack the bulbous tip that the male possesses. Instead the females have two tiny finger-like cerci, which are visible on the second picture. Most are tan with clearwings that have various black markings on them. Their heads have a distinct "beak" that resembles a miniature elephant trunk. Adults feed on dead or dying insects, and occasionally fruit or nectar. 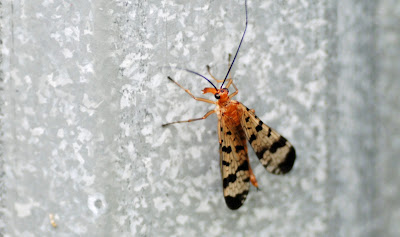 Mating occurs in the spring; males will attract females by offering a juicy morsel in the form of a tasty bug. They also secrete a pheromone (Chemical perfume). It seems the male has all his bases covered, if the pro-offered meal does nothing for her libido, then the intoxicating smell he emits surely will. After mating, the female will lay clusters of eggs in the soil. The tiny larvae will live in small burrows underground and emerge during the evening hours to feed on insects. They will often feed on underground insect larvae as well. These larvae will remain in these underground homes throughout the winter. In the spring they will pupate within the same burrow and emerge later in the spring.
They can be found in a wide variety of habitats, but are usually associated with grassy areas. They will perch about a foot off the ground on low growing shrubs or grasses. Look for them near woodlands, cultivated fields, grasslands, as well as backyard gardens (Where this one was photographed).
Adults may emit an offensive odor if disturbed. I personally have never smelled this obnoxious odor, but then again I rarely get them to sit still long enough to grab one.
Posted by Shelly Cox at 1:42 PM