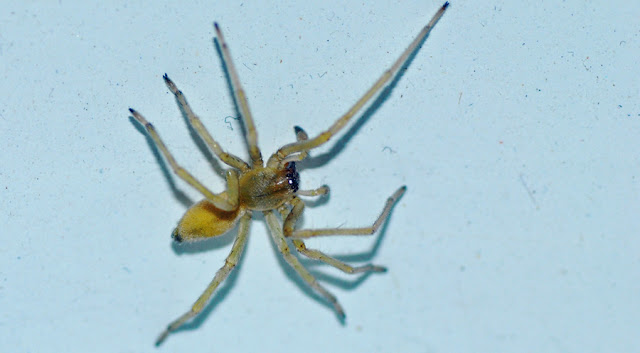 Long-Legged Sac Spiders in the genus Cheiracanthium are easily recognized by their long front legs and their overall "long-legged" appearance.There are 400 species within the family Muturgidae that are found worldwide. There are approximately 50 genera within Cheiracanthium. In the United States there are two species; "Yellow-Sac Spider" (Cheiracanthium inclusum)is the only species indigenous to the United States and is the most wide spread and can be found throughout most of the United States with exception the northern most states. Another species C. mildei is an introduced species, and originally came from Europe. In the late 1970's it was found throughout most of the northeastern United States. Most likely it's range has increased substantially since then. The yellow-Sac spider is about the size of a nickel and has a beige or yellow abdomen. They have very dark eyes and mouth.Their legs are very long, especially the front legs. It is these long legs that has earned them their common name of Long-legged sac spider. 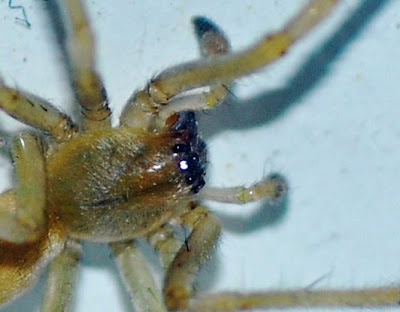 The yellow-sac spider is often found in homes and is the spider most responsible for household spider bites. There is some indication that they are mildly venomous to humans. The bite is reported to feel much like the sting of a hornet, and causes intense itching and burning at the bite site. In persons sensitive to the venom the reaction may be much like the reaction you would have to a black widow, only less severe. These symptoms may include fever, nausea, intense pain at the bite site, muscle cramps and malaise. Once again though, this would be a severe reaction, certainly not the normal reaction to a bite of this spider.
There is one species in Europe that is reported to cause necrosis of the skin much like a brown recluse can. There are no reports of such reactions to the Yellow-Sac Spider that calls the US home. These spiders are wandering spiders and frequently hunt for the food rather than capturing it in a web. It is during these hunting trips that bites to humans occur. The spider somehow becomes lodged between our skin and the bed sheets, clothing, etc. Of the two species C. mildei is the most aggressive and has been observed biting without provocation. C. inclusum is more often encountered in gardens where bites occur while we are moving wood piles,  planting or pulling weeds.
This particular spider pictured here was brought into my work by a woman who was concerned it could be a brown recluse as she has these spiders all over her house. I assured her it wasn't a recluse, and that while I wasn't exactly sure what it was I would find out for her. After doing some research I was able to let her know exactly what it is that has taken up residence in her home.
These spider are also found under leaf litter, under the bark of trees,and stones. Lumber left outside will also attract these spiders. They build a web that looks like a tube or "sac" that can be found in the corners of our homes, cellars, basements, garages as well as outside. These are small webs that they are capable of building in about 10 minutes. These webs may go unnoticed on neutral colored walls. The Yellow-Sac spider is less likely to use your home as an incubation site, and seems to prefer to lay her eggs outside under leaf litter or bark. The species C. mildei almost exclusively lays her eggs within human structures.
The female will lay her eggs in the late spring or early summer. These eggs are in a loosely woven silken sac and guarded by the female. The young remain in the web for a short period of time and will eventually leave to hunt at night. They return to the safety and security of their nursery web. After shedding their skin a time or two they will finally head out on their own. They will crawl to the top of a stem or stick and let down a strand of silk and "balloon" themselves to another location. The female is capable of having a second brood of eggs several weeks after the first. 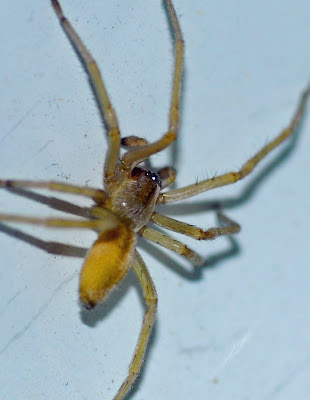 There have been studies done on their color reaction to the food that they eat. Those that consumed green caterpillars for instance took on a more greenish tint. Those fed red fruit flies, were noticeably reddish-pink in color. Still others were fed common house flies and took on a definite gray tone.
These spiders are very rapid runners and can climb any surface without trouble. This one was quite intimidating as I took pictures of it, he ran "at me" very quickly, and relentlessly. I have an admitted phobia of spiders, and fast spiders are the worst. I am slowly overcoming my fear, but this spider could regress me!