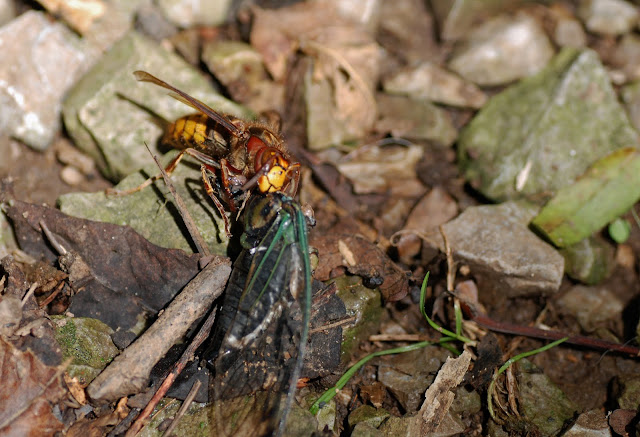 This incredibly aggressive wasp is a European Hornet (Vespa crabro), even it's Latin name suggests a crabby beast. Like their common name suggests they originally came from Europe. They were first found in New York in the late 1800's and can now be found throughout the Eastern United States. Sometimes they are referred to as "giant hornets", and with an overall length of 1 1/4 inches it is easy to see how they earned that name. These are very thick bodied wasps with an orange banded abdomen. The head, thorax and parts of the abdomen are reddish-brown. Directly behind the eyes their is a swollen area that is very noticeable.


(Internet Image)
The first picture was taken in Townsend, TN near the smoky mountains at a cabin we rented. We were getting ready to leave and explore the area, when I discovered this large wasp attacking and eating this Robinson's Cicada. I was able to get within inches of it and take photos without it seeming to disturb the wasp in the slightest. I looked up information about this species and discovered that cicadas are often the food of choice for this wasps offspring. The adults will attack and kill large insects, like the cicada and take bits of it back to the hive for the larvae to feed on. The adults are fond of sap flows, nectar and a sugary substance secreted by the larvae.
You will typically find them in timbered areas. In the spring bred queens become active and will seek areas to build a nest. This may be hollow trees, old honey bee hives, or even in human structures. They will use bits of chewed up wood to form a pulp in which to form their hive. The bred queen will form cells within the hive and lay her eggs. These eggs hatch and she will care for them on her own. Once these new larvae have matured they will take over the care of any future larvae and the expansion of the hive, as well as caring for and protecting their queen. The queen's only job from this point on will be to lay eggs. By mid-summer there may be 500 individual hornets within the hive. A very large hive might contain up to 1,000 wasps. Later in the summer (August) the queen will lay eggs that develop into drones (males) and these drones begin seeking fertile females with which to mate. After mating, the drones die, as does the queen. The newly bred queens will overwinter in secluded areas under leaf litter, or the bark of trees. the following spring the cycle begins again. All the former members of the hive will have perished. It is these large hornets nests that we often find  in trees or even in piles of hay in barns. Once the first freeze has hit, these wasps die off and the hive is safe to collect. This is usually sometime in November or December.
Occasionally you will see these wasps at porch lights. Presumably they are there seeking insects to feed the larvae.
Posted by Shelly Cox at 5:10 PM