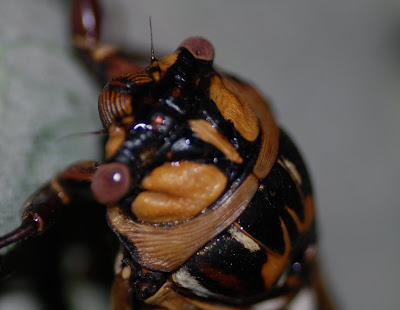 There are 11 species of cicadas in Missouri and many of them have no common name other than to be called "Dog-Day Cicada". This moniker is in reference to their appearance during the hottest days (or dog days) of summer. The one pictured in the first two images is Tibicen dorsata and is frequently found in open grassy areas such as prairies or grasslands. They are quite large, topping out at 2 inches in length. This species is one of the most beautiful of the cicadas that call Missouri home, not only is it an impressively large species, but it's coloring is a beautiful shade of caramel-brown with striking black marks. The eyes are a deep reddish-brown and very wide-set in typical cicada fashion. This particular species tends to be difficult to approach and is quick to fly away, although my experience with this one proved otherwise. I was able to capture it, photograph it and later add it to my collection. 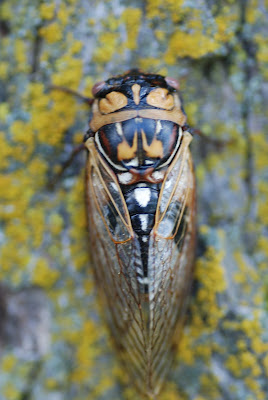 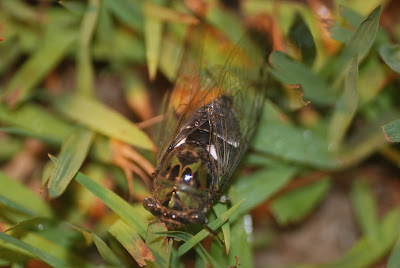 Most of the cicadas I see around our farm are this variety pictured above. The olive-green and black coloring of another Dog-Day Cicada genus Tibicen. Nothing says summer like the din of these noisy insects calling loudly from the tree-tops or wherever they happen to be. Cicadas are the loudest of all insects and the males typically begin singing loud and proud in July or August here in NW Missouri.  They use a special membrane called a tymbol (much like a cymbol I guess), that is located on their abdomen. These insects can be heard a mile away, and each species has their own unique song and can distinguish each other by sound alone.

A common sight is finding their shed skin stuck to fence posts, porch rails or the sides of trees. The one pictured below is still encased in its final skin. This is what they look like right before shedding for the final time. After ridding themselves of their ill-fitting skin they will be very vulnerable as their skin is moist and has not harden sufficiently to allow for escape from predators. Our cats and dog seem very fond of toying with these insects. They will bat them around the porch to get them to make a noise. This turns into quite a little game until I take mercy on the poor cicada and place it out of harms way. 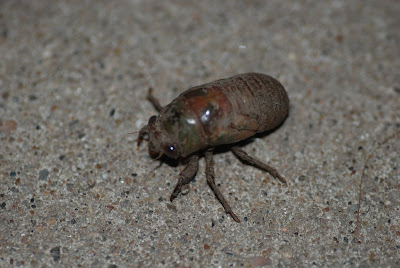 Cicadas can be found in almost any environment including rural, urban and suburban areas. Typically anywhere there are trees or sufficient plant growth. The larval stage of the cicada feed on the roots of trees and plants. It is not fully known if the adults feed, although they may feed on some plant juices. These insects are often mistakenly called Locusts, but locusts are migratory grasshoppers and are not closely related to cicadas at all, in fact they are in a completely different order of insects. Cicadas are classified with "True Bugs" in the order Hemiptera with other true bugs like stink bugs, assassin bugs and leaf hoppers. Locusts are classified in the order Orthoptera with grasshoppers, crickets and katydids.
Cicadas are completely harmless to humans, they do not bite, sting or spread disease. The only harm they may cause is damage to the root systems of plants or trees if they are present in significantly large numbers.

Once a male has sung his little heart out and attracted a mate the female will lay her eggs near the base of trees on top of the ground. When the eggs hatch the young nymphs will burrow into the ground and remain there to feed. They move around via underground tunnels they form. Depending upon which species of cicada you are talking about they may remain underground from two years to as much as 17 years for the periodical cicada. The periodical cicada is due to make its appearance in Missouri in 2015.

Another Dog-Day Cicada is the Robison Cicada (Tibicen robinsoniana). They are located in a small portion of southern Missouri and are typically associated with River areas. I photographed several while we were in Tennessee last year. They are a beautiful aqua-green color with black markings. They are very easy to approach and to capture. 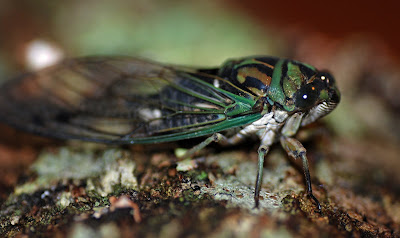 Besides your local cat or dog many animals prey on cicadas as a tasty choice for a large amount of protein in one package. Mice, other insects, bullfrogs, and birds all dine on these noise makers. I know of at least one species of wasp, the European Hornet that uses cicadas as the meal of choice to feed their growing offspring. After stinging the unfortunate cicada the wasp will chew off bits of the hapless soul and carry it back to their nest and feed the chewed up bits to their larvae.

While it is still spring and early yet to be thinking about cicadas, it certainly won't be long before the deafening noise of the Dog-Day Cicadas mating call will be heard with a vim and vigor to make any Don Juan envious.
Posted by Shelly Cox at 2:20 PM