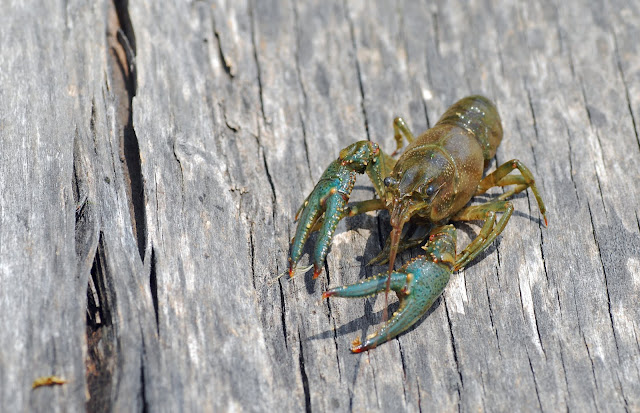 I know this creature is not an insect, but it definitely qualifies as an arthropod, which puts it in the same phylum as insects. I thought it would be fun for a change to feature a new animal with an exoskeleton, that does not have 6 legs or wings.

Crawdad, crayfish, crawfish, or mudbugs are common names for these lobster-like crustaceans. In Missouri the favored name seems to be Crawdad. The ones pictured here I believe are examples of a crawdad called "Northern Crayfish". These guys can vary considerably in their coloration. This particular one had beautiful blue pinchers with reddish-orange tips. The baby in the middle picture is a juvenile example of the same species. 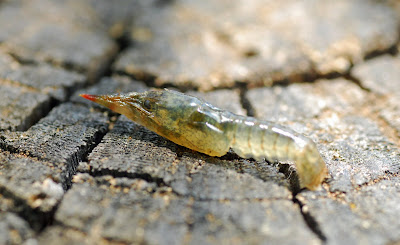 Crawdads are in one of two superfamilies, either Astacoidea or Parastacoidea. They are closely related to the lobsters they resemble, and even taste a bit like them too. They are found in pond, lakes, streams and creeks with sheltered areas that allow them to hide from predators. Looking under rocks submerged near the shore of ponds will almost always produce at least one crawdad. Crawdads generally cannot tolerate polluted waters, and therefore may be considered an indicator species. They can help "Indicate" whether or not the water where they reside is healthy. If there is a lack of crawdads present, or if many dead specimens are found then it may indicate there is a problem with that water source. The study of crayfish is called astacology. 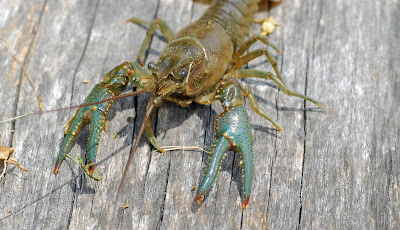 Crawdads are commonly used as bait for catching fish such as catfish, bass, pike and muskie. This preference for using crawdads as bait can cause ecological problems. Many of the crawdads sold as bait in "Bait & Tackle" stores are not native, such as the "Rusty Crayfish". When irresponsible fishermen have leftover bait and throw them out they can reproduce and take over the areas where they are released and push native species out. In some areas they have all but replaced native species of clearwater crayfish. An extended problem from releasing bait crawdads is that sometimes zebra mussels attach themselves to the crawdads and are also released into new areas that allows them to take over. It is always best to bring bait back home with you and dispose of it, never throw it in the waters where you've been fishing.

Crayfish flourish in waters 55 to 60 degrees F. They shed their exoskeletons in proportion to their rate of growth, as often as three or four times a year. The average life expectancy for a crawdad is about three years, but the "granddaddies" may live to be seven or eight.

Crawdads are used as a food source throughout the World. They taste very much like lobster. A common myth is that a crawdads with a straight tail died before it was boiled and is not safe to eat. In reality, crawdads that died before boiling can have curled tails as well as straight, as can those that were alive, and may very well be fine to eat. Boiled crawdads which died before boiling are safe to eat if they were kept chilled before boiling and were not dead for a long time. (This does not mean that a sack of crawdads that are all dead should be boiled.) A much better test than the straight tail as to the edibility of any crawdads is the tail meat itself; if it is mushy, it is usually an indication that it should be avoided.

I have eaten crawdads and can vouch for their tastiness. They are commonly used in Cajun recipes. Anyone who loves seafood will surely love them as well. 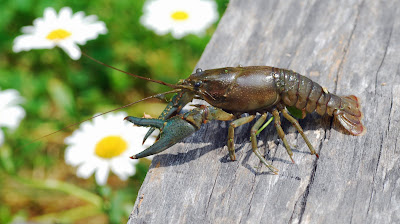 Here are some recipes:

The amount of crayfish needed for a serving varies according to the size and variety captured. As a general rule only, 12 medium-sized crayfish (six to seven inches long) are sufficient for one serving; one pound of crayfish; liveweight, is equal to one cup of meat, using tails and claws; and one cup of crawfish meat will usually serve from two to six, depending on the recipe and amount of other ingredients.