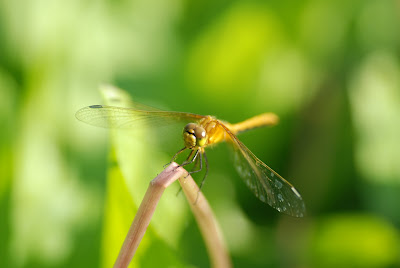 White-Faced Meadowhawks (Sympetrum obtrusum) are found throughout much of Canada and the United States, although they are absent from the southern portion of the United States. They can be found in a wide variety of habitats usually near forested areas, including near ponds, lakes, streams, marshes and occasionally boggy areas. The one I photographed here was near an old pond turned wetland on our farm. It was very easy to approach, rarely flying more than a foot away at any given time. It's wings were stunning, they looked like liquid gold shimmering in the sunlight. Like all dragonflies these beauties feed on a wide variety of small insects that they capture while in flight. Their long basket-like legs are perfect for scooping up unsuspecting insects and dining while in flight, giving new meaning to the term "fast food".
The one pictured here is a female, mature males have a distinctive "white face" and they are the only dragonfly within this genus that does. They also have a bright red abdomen and an amber patch near the base of the wings. Females and immature males are golden in color, some mature females will have a faded reddish abdomen. Instead of the white face of the adult male, they will have a yellow face.
Dragonflies are one of the best forms of insect control we have. Each summer they visit our backyard goldfish pond in large numbers. I can sit and watch them for hours capturing food, competing for mates, and alighting on nearby surfaces warming their wings in the sun. They are the epitome of summer for me.
Posted by Shelly Cox at 10:27 AM