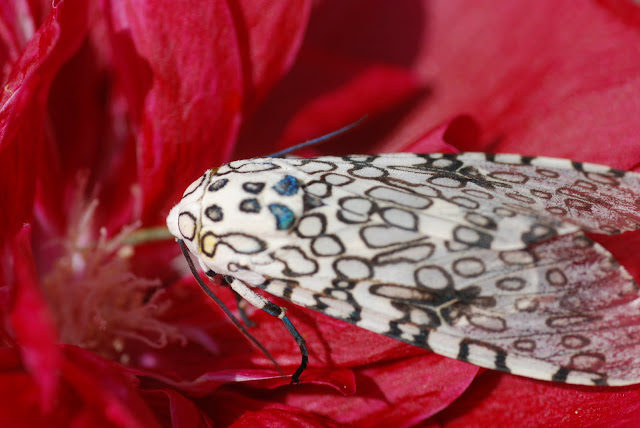 This stunning spotted moth is the Great Leopard Moth (Hypercompe scribonia). A very fitting name I might add. Just look at those black circles, are they not reminiscent of a leopard? This moth belongs to the family of moths called Arctiidae, which are the "tiger moths". Great Leopard Moths are found in shrubby areas along roadsides, in gardens and along timbered edges (which is where this one was found) throughout the Eastern United States, west to Texas, north to Michigan and into southern Ontario. I'm not sure how common they are, although I do know they are not as common as many of the other species of tiger moths. In the past 5 years I've only ever seen 2. They are fairly large with a wingspan up to 3 inches. As beautiful as their wings are it is their body that is magnificent. It is a striking combination of bright blue and bright orange. 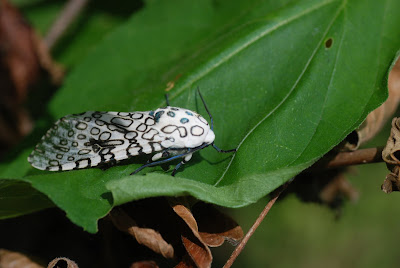 Females will emit a pheromone (Chemical perfume) to attract males, which are capable of smelling her fragrance from great distances. After mating, the female will lay her eggs on a wide variety of vegetation including Plantain, Maple, Violet, Willow, Dandelion, and Cherry to name but a few. Very likely the female perishes shortly after laying her eggs. The eggs will hatch and the young caterpillars will overwinter in leaf litter. As soon as the temperatures begin to rises the caterpillars will become active and seek food. These little munchers grow rapidly and complete their life cycle in a matter of weeks. 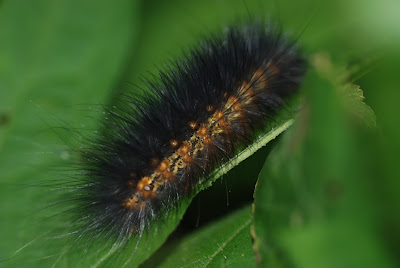 The caterpillars are one of the infamous "wooly bear' caterpillars. Reaching lengths up to 3 inches and covered in dense black hair with a reddish colored skin they are unmistakable.
Most likely the adults do not feed. Instead they consume so much food and nutrients as a caterpillar they merely concentrate on mating and egg laying in their adult stage.
When disturbed these moths have a unique defense mechanism, to deter possible predators they will release a yellowish goo from their eyes. This liquid goo is distasteful to would-be predators and is sure to leave a bad taste in their mouth. This is a trait common to tiger moths. Plus it looks creepy too! 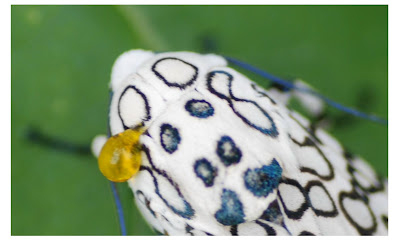 A friend of mine was so enamored of these moths that he was prompted to write a verse about them....I thought I would share it with you. 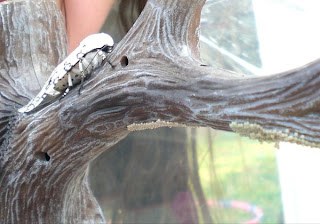 Great Leopard Moth
If predators will do some screening
And I'm sure they'll give me a bye
In that yellow goop there's a whole new meaning
To the old phrase "evil eye"
By: Richard Lewin
(picture provided by Jkc133---
who found one of these beautiful
moths and is keeping it in a critter keeper.
She has already laid eggs and the plan to
raise the caterpillars. You can see the eggs attached to the
limb in the critter keeper)
Posted by Shelly Cox at 10:08 AM