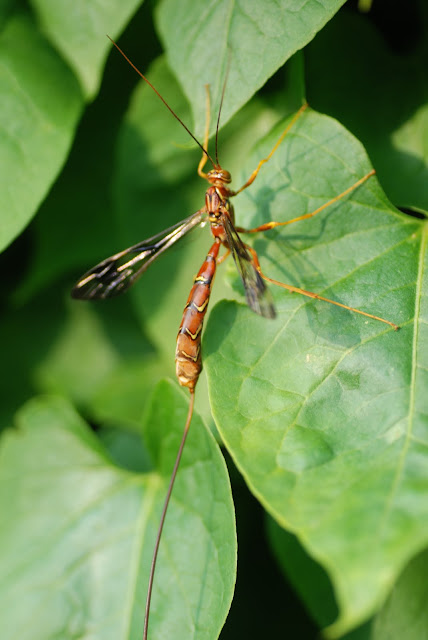 This gorgeous insect is a Giant Ichneumon (Megarhyssa macrurus). They are found throughout most of the United States, as well as Southern Canada and Mexico. They are large relatives to wasps with a body length up to 2 inches. The females are much longer with their ovipositor factored in. The one pictured here is a female. They use that long extension (ovipositor) not for stinging, but for depositing eggs within decaying stumps. After mating, the female will seek the larvae of another insect called a pigeon horntail (tremex columba) which are found in rotting wood. She will then drill that ovipositor into a stump, log or other piece of wood and lay her eggs on the horntail larvae. Depending upon the depth of the larvae she is after it may take her  up to an hour to reach her quarry and lay her eggs. I always wonder how the female "knows" that the horntail larvae are even present. Do they hear the vibrations of the larvae as it tunnel through the wood? Do they feel them as they move under their feet? Is there a subtle change in the density of the wood that they can feel with their antennae? However they do it, it sure is amazing.

When the eggs hatch the newly born larva will feed on the horntail larvae. Once the larvae have entirely consumed the horntail, they will pupate and emerge as adults a few weeks later. The female seems to prefer trees that are 2 to 3 years into decay. The one pictured here was flying around an old Silver Maple tree stump. I am pretty sure the stump was home to many horntail larvae, as I had seen the adults frequenting the stump. I assume they had laid eggs within the stump, which in turn attracted the giant ichneumon. As adults they do not feed. In spite of their ominous appearance these insects are harmless to humans and do not sting. Good thing too....could you imagine?