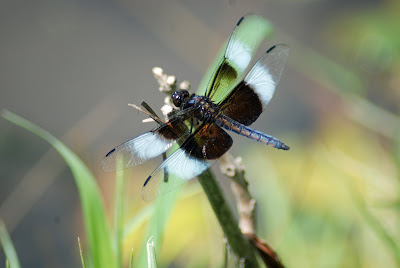 Widow Skimmers (Libellula luctuosa) are common dragonflies found throughout most of the United States with exception to the Rocky Mountains. They can also be found in Mexico and parts of Canada. They are a medium sized dragonfly reaching lengths up to 1 3/4 inches and wingspans up to 3 inches. Adult males have dark brown to black patches bordered by white on their wings. As they age their bodies become more white; like the one in the first picture. Females and young have the same dark patches on their wings but lack the white border.

Males will aggressively defend their territories from other males.  They perch and patrol for females, on constant guard for intruding males from other territories. Once mated the female will lay her eggs in the water, either on bottom sediment or on aquatic plants. As nymphs they will spend their lives underwater feeding on other aquatic insects. The following year they will be ready to leave their watery home and fly for the first time. They will crawl out of the water onto a stem or rock or some other solid surface and shed their skin one final time. Once free from this skin the helpless, newly emerged adult will remain in place until it has pumped sufficient fluids into its wings. After the wings completely fill out it will flex them to strengthen them, and take flight for the first time. What a glorious feeling this must be. These beautiful dragonflies can be found in a wide variety of habitats, look for them near ponds, lakes and often times out in fields seeking their insect prey.

Their common name of "Widow Skimmer" comes from the cloak-like black patches on their wings. The species name of luctuosa translates into sorrowful or mournful.