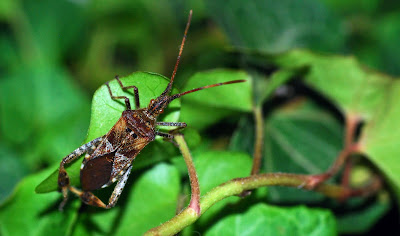 Western Conifer Seed Bugs (Leptoglossus occidentalis) are in the family Hemiptera (true bugs). They are commonly called Leaf-Footed Bugs from their flange-like hindlegs, they almost look like they are wearing bloomers. These bugs are a western species, and have been expanding their range to include the North Eastern portions of the United States. Now it seems we can include Missouri within that expansion. I would be curious to know how many of these bugs are showing up in Missouri, or if they are relatively rare. I sent this image to Eric at bugguide and he confirmed my assumption that this was indeed the Western Conifer Seed Bug. One identification characteristic that many specimens have are a zig-zag line on their mid-portion. This picture shows that marking. They can get quite large and reach lengths up to one inch, this one was closer to 3/4 of an inch. They are mottled brown with various shades of tan and rust mixed in. They are really quite beautiful. I found this one on the sidewalk outside my DR.'s office, it seemed like a weird place to find one, I scooped him up to identify later. Now that I know what he is, I will have to look to see if there are any fir trees near the DR's office. Or maybe he was contemplating entering the DR's office to spend the winter in warmth and comfort, and I thwarted his efforts.

These bugs feed on conifer trees, or pine trees as the name suggests. The female will lay eggs on the needles of a variety of pine trees. In about 10 days the eggs hatch and the young nymphs will feed on the tender scales of the pine cones and sometimes on the needles themselves. The adults feed on the developing seeds and early flowers of the pine trees. The nymphs start out orange and brown and eventually will change to their adult form in late August. These bugs are completely harmless to humans, they do not bite, sting, carry disease or feed on human food. Their only form of defense is a stinky discharge that they emit if handled. This is to discourage predators. I guess if you smell bad nothing would want to eat you. Even the ones that might make it into your home in the fall are merely a minor problem. They will not breed in your home as their development is restricted to the host plant. If you can tolerate their presence, and if the invasion isn't in too large a number, rest assured they will leave your premises in the spring and start their life cycle all over again.