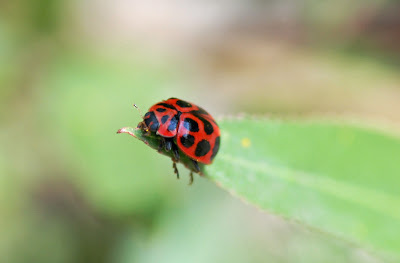 This lovely dark red ladybug is the V-Marked Lady Beetle (Neoharmonia venusta venusta). They are solid red with black markings. At the midline of their wings is a distinctive "V" shaped black marking from where they get their common name. This species has no white on it. They are a bit on the large size for a ladybug, measuring up to 3/8 of an inch. Unlike other species of ladybugs that typically feed on aphids or other soft bodied insects, this species feeds on beetle larvae, especially the larvae of the Cottonwood Leaf Beetle (Sometimes called Willow Leaf Beetle). The one pictured here was photographed at Elrod Mill CA in NWMO. It was the only individual present, but there were a lot of larvae of this species on the various river willow plants. It wasn't long before I spotted a Cottonwood Leaf Beetle. It seems they will choose habitats that are consistent with where their common prey would live. Look for them near rivers, streams and any areas where cottonwood or willow trees are plentiful. 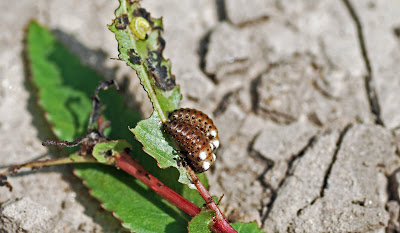 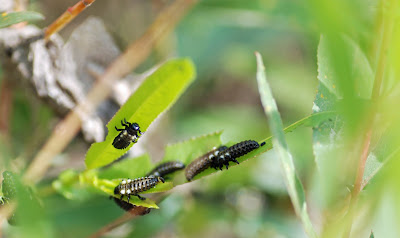 These little black alligator looking creatures are the larvae to the V-Marked Lady Beetle. They were in large supply near the river.

I am constantly amazed at the many different species of ladybugs that there actually are. I spent the whole summer on the lookout for new, or previously un-spotted species. I was not disappointed, I found many I had never seen before. I will try to post some of them over the next few weeks. Very little information was available about this particular species. I am not sure how far their range goes, although I did find information that claimed they are now quite plentiful in southern Canada, having expanded their range further north. They are without a doubt one of the prettier species of ladybugs I've ever seen. Their food choice can only make them beneficial, as cottonwood leaf beetles can cause damage to trees. 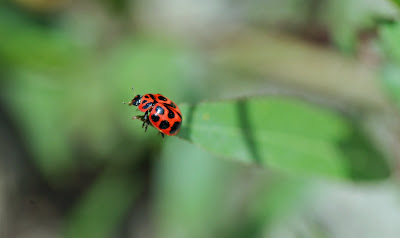