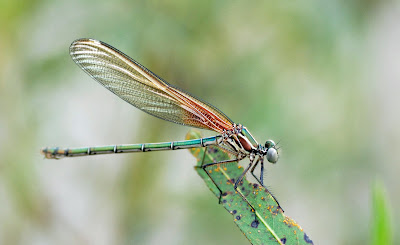 This colorful damselfly is a female American Rubyspot (Hetaerina americana). They can be found throughout most of the United States with exception to Washington and Idaho. Populations also occur in three provinces in Canada including Quebec, New Brunswick and Ontario, also found in Mexico.

They are a fairly large damselflies reaching lengths up to 2 inches. The females can come in two color forms, one has green on the thorax and the other form has copper on the thorax. They are found near streams or slow moving rivers. The one pictured here was photographed at Elrod Mill Conservation Area near the Platte River in NWMO.

The one here to the right is the male, he was in constant motion and was very difficult to photograph (hence the poor quality). He was just as striking as the female with his red patches and red thorax. These are one of the prettiest damselflies in North America, and I was excited to find them.
Posted by Shelly Cox at 11:04 PM