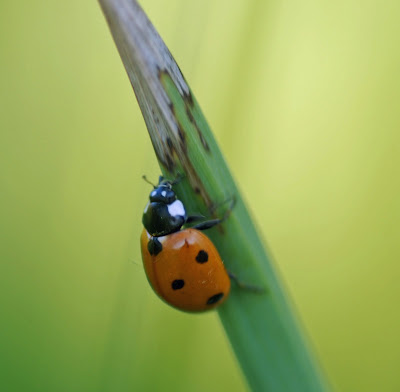 The Seven-Spotted Lady Beetle (Coccinella septempunctata) is another introduced species of ladybug. This one hails from Europe rather than Asian like the Multi-Colored Asian Lady Beetle. They were brought to this country with the same purpose in mind...to control aphids. Apparently our own lovely native species weren't doing the job well enough to suit enterprising individuals who thought it wise to help them out by bringing much more aggressive species to the rescue.

As many of you know it has become quite difficult to locate a native species these days. The Nine-Spotted Lady Beetle (native) is all but extirpated in much of its range. They just can't compete with these intruding newcomers. Seven-Spotted Lady Beetles are red with 7 black spots on their elytra (wings) just as their common name suggests. The seventh spot overlaps on the midline towards the head. They are small at about 1/4 of an inch. The adults overwinter in leaf litter or other protected sites, usually near where they were reared and fed. In the spring they will become active again and mate. The female will begin egg production shortly there after, and is capable of laying up to 1,000 eggs over a three month period of time. Once the eggs hatch, it will take the newly born larvae up to three weeks to complete its life cycle.

It is estimated that a single lady beetle may consume up to 5,000 aphids in it's lifetime. There is no arguing the effectiveness of these little munchers when it comes to aphid control. That being said,when it comes to introducing foreign species, I just can't help cringe when I think about the over all affect it will have on the native species that most likely will end up struggling to retain a foothold. What often times may seem like a great idea at the moment, turns out to be a disaster later down the road. What makes this even funnier, is New Hampshire, Tennessee, Delaware, Massachusetts, Pennsylvania and Ohio have all adopted this species as their State insect. For many of us a ladybug, is a ladybug and we pay no attention to species. There are a few of us however, from a purely nostalgic standpoint, that miss the days from our childhood when the ladybugs as we know them to be were in abundance. There is nothing to be done about the populations of nonnative species at this point, so the only logical thing to do....is except what is and be grateful for the service they provide.
Posted by Shelly Cox at 12:36 PM